Great read so far, great to meet you again Lemming, after all its been 3 years !! I know me bad

Hope to see you next year for more stoned wandering.

Herb!
Take happiness with the heartache, go through life wearing a smile.

Another great 420 Lemming. Looks like a lot of good smoking sessions and the boat ride was a success, always a plus.

Great to read all the trip reports from everyone.

If you never do, you'll never know.
Top

GetHigh,DoStuff&Dont give a FUCK!
Top

Nice write up and pics lem, sounds like a great time as usual

Absolutely great read bro. Just wondering how do these tnts work u just go upto people and shout acd tnt? Lol or u see someone say hi and bye or do u plan to do shit for the day?
Top

I'd always hoped that having twenty people saying they were up for a boat trip might mean that around ten would actually turn up but I'm still pleasantly surprised that exactly ten of us are walking from Utopia to the boat. I think Macky played a big part in that particular bit of cat herding so thanks mate.

It's already been a long day of heavy consumption so we float down the street. We find the Ganja Cruise boat and our captain waiting on the Prinsengracht. He suggests that we cross the bridge so that he can pick us up on the other side where the bank is lower. The conversation then moves to beer and a pickup closer to the Albert Heijn. Eventually Papi volunteers to run to the AH and soon returns with packs of beer and we board at the easy spot opposite where the boat was moored.

Once aboard, the predicted hot box session down in the saloon starts before we even set off. The bongs, rigs and joints are blazing and music is playing. Mr & Mrs Macky are manning the bar, producing cans of beer from the coolbox. Ahh, this is the life. 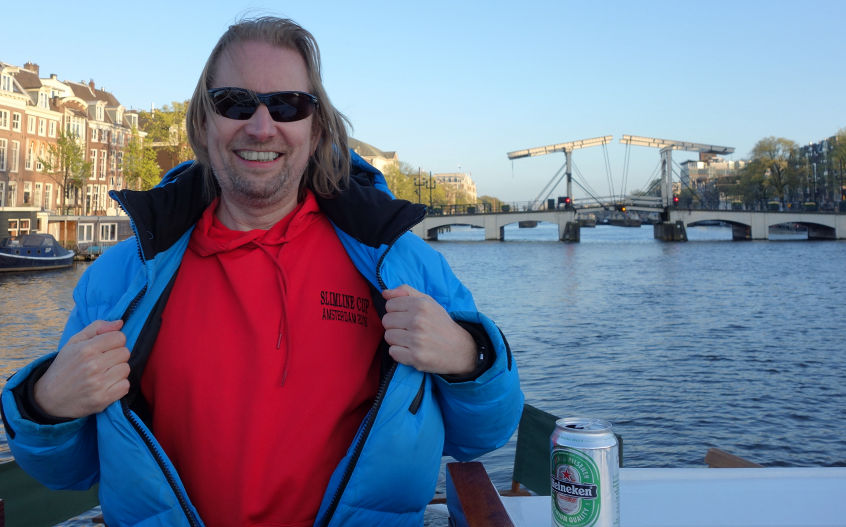 It's slightly chilly up on the aft deck but still a nice spot to watch from. The "get yer tits out for the lads" pose in the photo above is in front of the iconic Magere Brug (the "Skinny Bridge"). I'm showing off the amazing sweatshirt that Macky kindly gave me.

After my close encounter with a bridge last year I'm very wary of them. Some are incredibly low and the boat only just fits under them. You can see scratches on the one below, presumably from boats that didn't quite fit.

Ducking or sitting down is essential as we pass under low bridges. Alternatively, one can take the Papi approach and limbo under them. 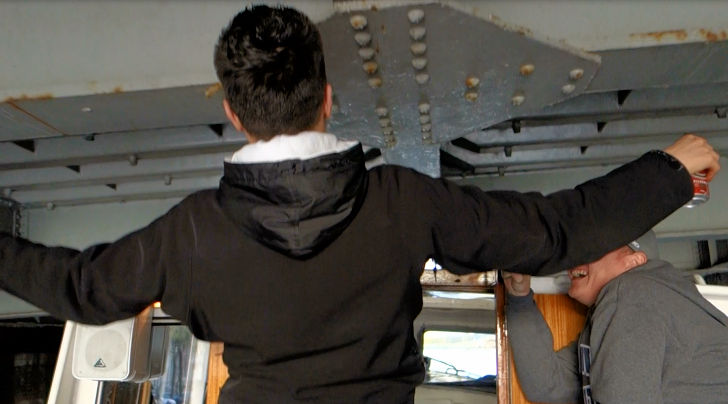 Ganja Cruise is a friend of the forum. He takes us out on his boat for free and we might give him a little present in appreciation. It's a similar arrangement as with the old St. Nic. boat. Commercial boat trips are not allowed because the mafia-like big boat companies enforce their monopoly.

When passing through a narrow section, such as the bridge under Zeedijk, we always give way to the big boats so as not to invite unwanted attention. Similarly, when we pass a police boat, all of the bongs and stuff are moved below the windows. At one point on the Amstel we have so many boats to get out of the way of we finish up stuck in the corner. JDog pushes us off and scoots along the bank in a way that causes Captain and me some concern that he could get his leg trapped. All is well though and we're soon on our way again.

The sun is sinking as we cruise. It's a beautiful ending to a fantastic day. 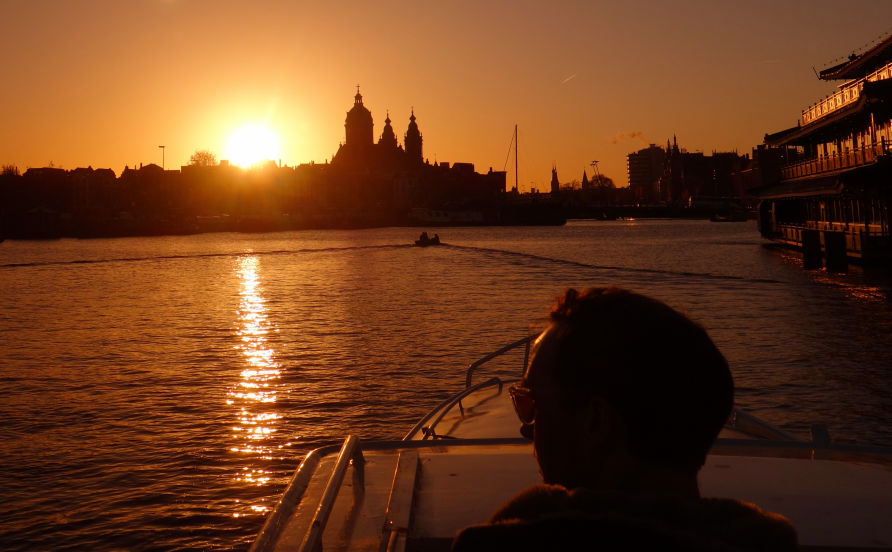 Except, no, it's not the end yet. A gorgeous full moon is rising to replace the sun. Still more partying to be done yet. 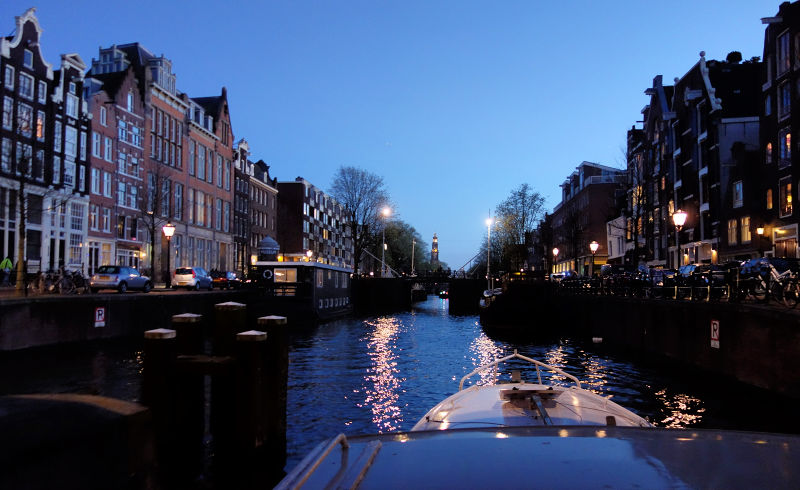 After the boat trip we all tumble back into Utopia. 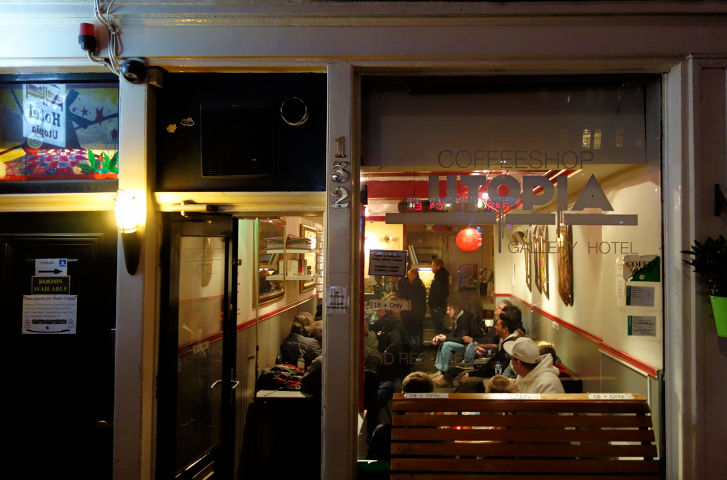 All of the kit is soon out and in operation. The epic session continues. 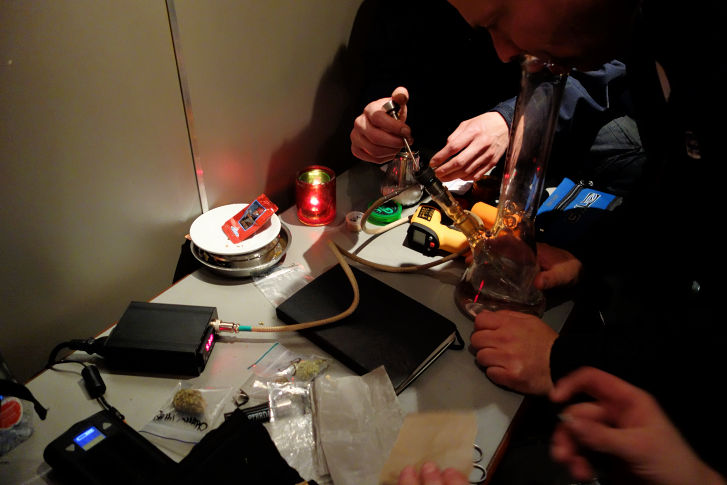 Macky and OneHighMofo insist that I should present the cup to Ingi. Reluctantly I do my best. Of course we all know the result, as might Ingi if she's read the forum. So I attempt to smuggle the cup up to the bar unnoticed and stand there red-eyed and wobbly, leaning on the bar.

Coffee? Grass? She asks sympathetically. Um, yes, probably, but first I've come to give you this. I lift the cup and plonk it on the bar. A huge smile appears on her face and applause fills the shop. Hugs all round. 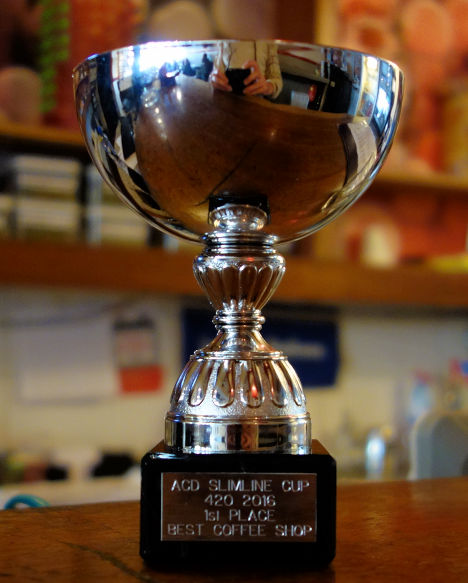 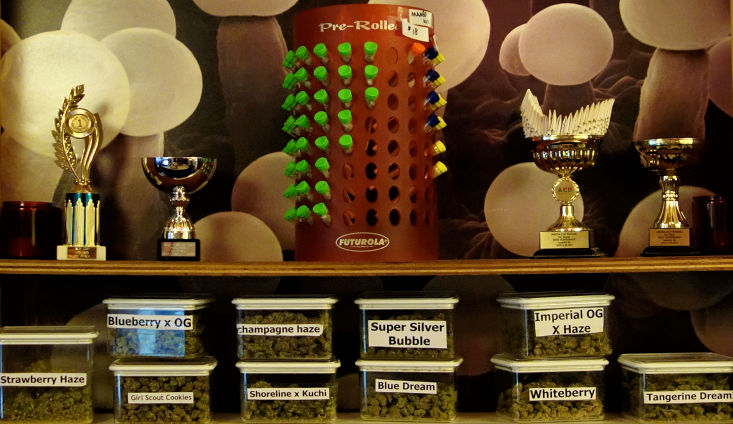 I think the "Slimline" bit probably needed some explanation and I'm not sure whether any of us ever gave one so this might remain a mystery to anyone who sees it.

All too soon we're rushing off again as it's getting late and Papi wants to finish the night at 420 Cafe. 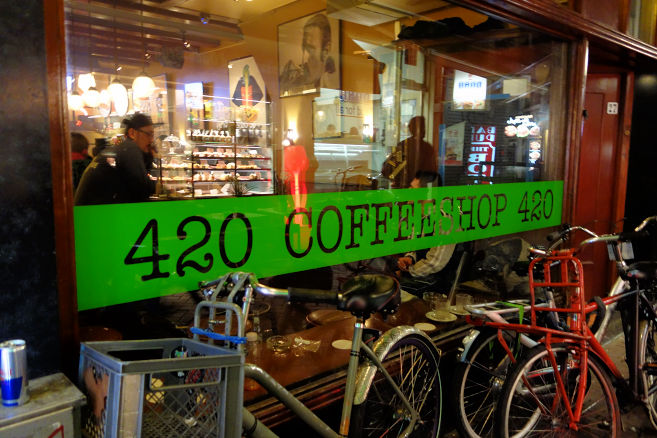 Somehow we manage to commandeer the big table at the back. We're getting good at this! Frank Zappa looks down at us from the walls around. 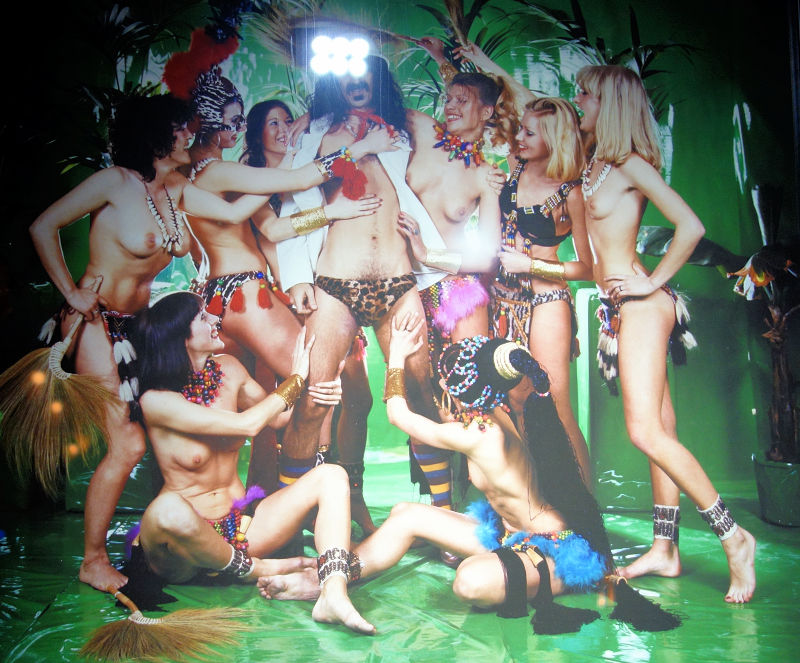 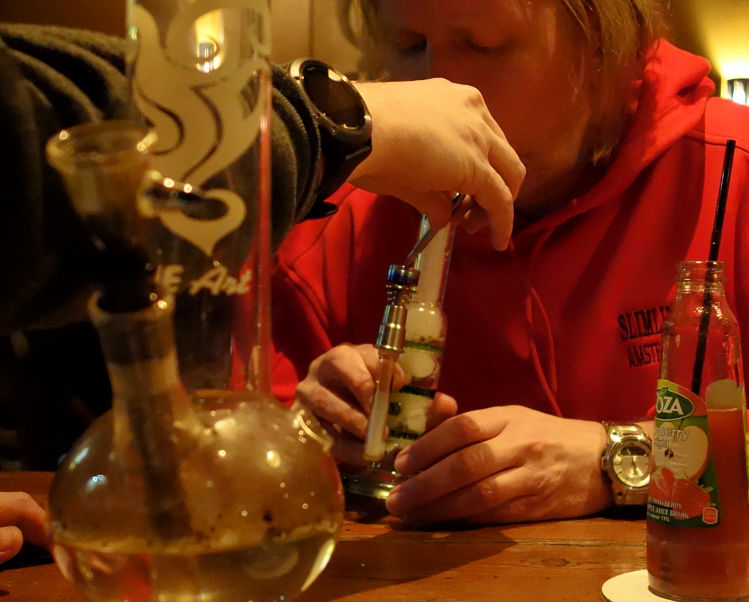 420 closes at 1am and the remains of us are left outside. I'm keen to pile into The Bottle next door for a drink and more joints but nobody else is up for it so we go our separate ways.

Even the Bulldog looks pretty tonight as I float by on my way home. 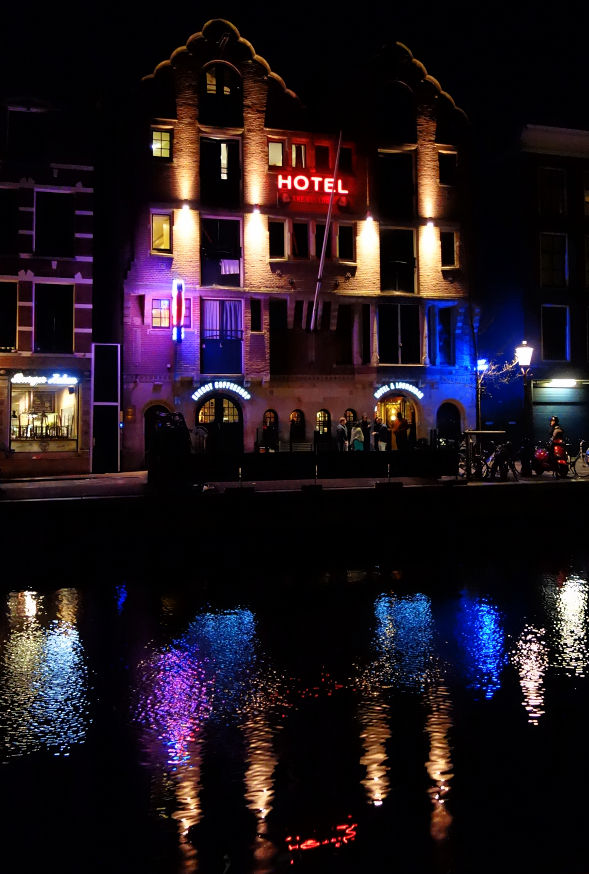 Brilliant Lemming, and great photo's thanks a mill.

What a long strange trip it is.
Top

Thanks Lemming for a great report.

Quick question.. I thought all the coffee-shops on warmoesstraat were closed down as the council were trying to clean up the area? But you mention Baba and Stones in another thread?
bluarg!

A fun read and awesome pics to go along with it. Nicely done!
Top

Hi, I take some time off, I really glad to see this family continues to meet. Thanks Lemming, great report.
Top
Post Reply
47 posts