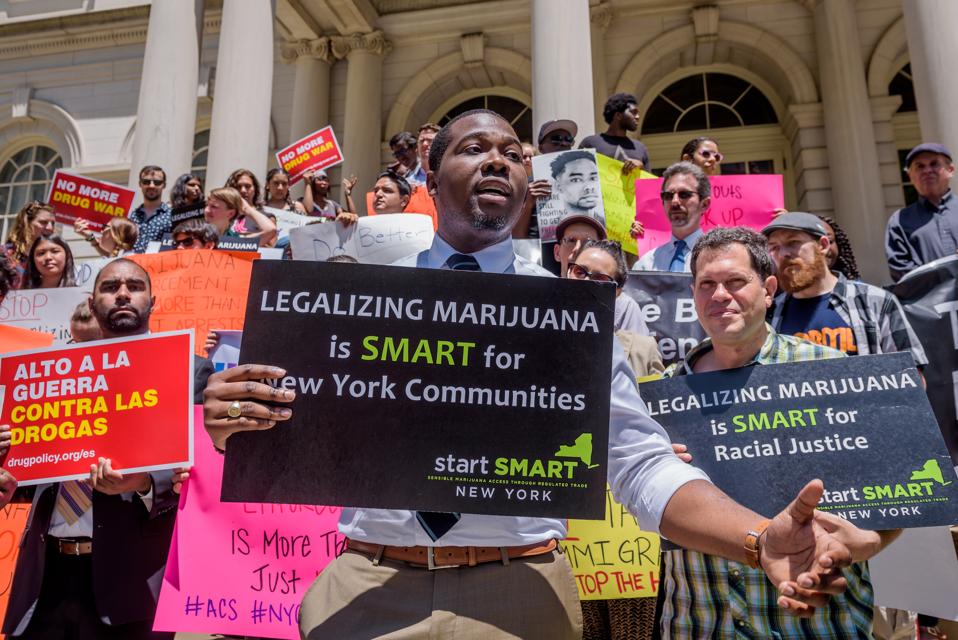 New York Governor Andrew Cuomo has reportedly taken another step toward legalizing marijuana in the state by appointing a team to sort out the needed legislation; advocates are praising the move, but urging lawmakers to ensure they get it right.

Governor Cuomo announced Thursday that he has appointed a panel to draft legislation to legalize marijuana in the State of New York. In doing so, Cuomo seemed to further demonstrate a willingness to weigh in on an issue that has plagued New Yorkers for decades, and which the incumbent governor has seemingly rushed to catch up on since gubernatorial primary challenger Cynthia Nixon picked up the issue earlier this year.

According to Thursday's announcement, Cuomo hopes state legislators will be able to consider a marijuana legalization bill for New York State in the upcoming session. Such legislation will reportedly be based on the findings of a multi-agency study the governor commissioned in January, led by the state Department of Health, which found that the positive impacts of marijuana legalization outweigh the negative impacts in New York.

"As we work to implement the report's recommendations through legislation, we must thoroughly consider all aspects of a regulated marijuana program, including its impact on public health, criminal justice and state revenue, and mitigate any potential risks associated with it," Cuomo commented in a statement. "I thank the members of the work group for their time and expertise as we work to craft a model program."

In all likelihood, New York will legalize recreational marijuana during the next legislative session. This sea-change will demand a regulatory scheme up to the task. On one hand, the regime should cabin the risks associated with legalizing a drug that affects people’s mental states and abilities to drive. But on the other hand, the regime should also maximize the health, safety and financial benefits of bringing this market into daylight. After legalization, New York will become one of the largest marijuana markets in the United States. If rolled out properly, legalization will carry net benefits that far outweigh the costs.

In 2014, New York State passed the Compassionate Care Act and joined a growing number of states (twenty-nine currently, plus Washington D.C.) with an established medical marijuana program. Under this program, a limited number of organizations were approved in New York State to manufacture and dispense medical marijuana for a limited number of medical conditions. Since then, the number of organizations authorized to manufacture and dispense medicinal marijuana has increased and the list of qualifying conditions has been expanded to care for illnesses such as chronic pain, post-traumatic stress disorder and most recently to address the opioid epidemic. The Department of Heath reports that there are nearly 1,700 registered providers of medical marijuana and 59,653 patients.

Although Governor Cuomo was a supporter of medical marijuana, until now he had been opposed to legalized recreational marijuana out of fear that marijuana is a “gateway drug.” However, one of the most critical aspects of the Department of Health report is that it examined this question of whether marijuana truly causes people to use more serious narcotics that they otherwise would not have tried. It concluded that there is no conclusive evidence that legalizing marijuana increases its use, and that the majority of individuals who use marijuana do not try other illicit drugs.

The change in the governor’s position on marijuana appears to be driven by political interests. In the upcoming election, Cuomo faces a challenge by Cynthia Nixon — a candidate who has made the legalization of recreational marijuana a cornerstone of her campaign. And she has been proven astute to do so: the Department of Heath report highlights that 52 percent of American adults have tried marijuana and 44 percent of them currently use marijuana. These statistics represent potential voters. So Cuomo’s evolution on this subject is likely tactical.

The legalization of recreational marijuana has come to the forefront recently also because of social issues. The Department of Health report highlights that across the country, African-Americans are nearly four times more likely than caucasians to be arrested for marijuana possession — even though actual marijuana-use within these ethnic groups are about the same. Statistics like these are even more alarming in New York City: 86 percent of the people arrested in 2017 for marijuana possession in the fifth degree were people of color. Social problems like these and a change in society’s moral compass are what motivated the political changes now taking place. Elsewhere, in fact, Massachusetts, Vermont, Maine, Washington D.C. and Canada have all legalized recreational marijuana — and efforts are underway in New Jersey to do the same. At a time when many people have become disillusioned with the health of our democracy, this political responsiveness to a social problem represents a welcome bright spot in our democratic functioning.

To be sure, legalizing marijuana carries risks that regulators must take into heavy consideration. Take driving, for example. New York VTL 1192(4) prohibits the operation of a motor vehicle while impaired to any extent by a drug, which includes marijuana. This proscription will of course remain on the books for the foreseeable future. Once recreational cannabis is legalized statewide, legitimate concerns over driving under the influence of marijuana will only grow.

However, a few points of context are appropriate. First, equal if not greater risks emerge under the status quo. Under the current unregulated market for cannabis, consumers lack education of a product’s potency levels; its level of contaminants — like fungi spores, mold, bacteria, and pesticides; and are inundated with synthetic cannabinoids that affect the brain more powerfully than marijuana and carry unpredictable and sometimes life-threatening effects. Meanwhile, the Department of Health report identifies that in a Global Drug Survey, countries that decriminalized marijuana experienced reductions in the use of synthetic marijuana. And by bringing this underground market to the surface, consumers will be able to demand and expect transparency about what they are buying.

Second, legalization will help the law enforcement community. To deter DWI-by-Marijuana, it is expected the New York legislature will add a law that would criminalize it as a per se offense in the same manner alcohol is prohibited — by delineating a certain blood concentration above which adults cannot take the wheel. This is despite research that shows there is no correlation between certain per se levels of marijuana and impaired driving. Consider the example paved by alcohol: the 21st Amendment passed in 1933, abolishing prohibition; just five years later the first roadside breath testing device for alcohol emerged. Unsurprisingly, just as tests for alcohol-consumption did not emerge during alcohol-prohibition, tests for marijuana-consumption have only been in their infancy stages during the era of marijuana-prohibition. This is likely to change.

Third, relatedly, there is the money: The Department of Health’s inquiry investigated the revenue that would be created from legalized marijuana in New York. Independent of the jobs it would create, and the savings from reducing the need to arrest and prosecute low-level marijuana offenses, legalized marijuana would create a revenue-stream estimated by the Department of Health to range between $248.1 million and $677.7 million. This should more than offset any costs associated with the administration of a legalized marijuana program, and, in addition, should provide revenue streams that can be used for a variety of state-run programs and law enforcement initiatives like a cannabis-detector device for drivers.

Overall, if developed intelligently, the regulations that support the legalization of marijuana can lead to safer consumption of drugs that wide groups of people are already using; it can improve roadway safety and it can enhance governmental coffers so that other important initiatives become affordable. This new era will certainly come with surprises and challenges, but approaching the legal climate with a rational look at the costs and benefits is a wise place to start.