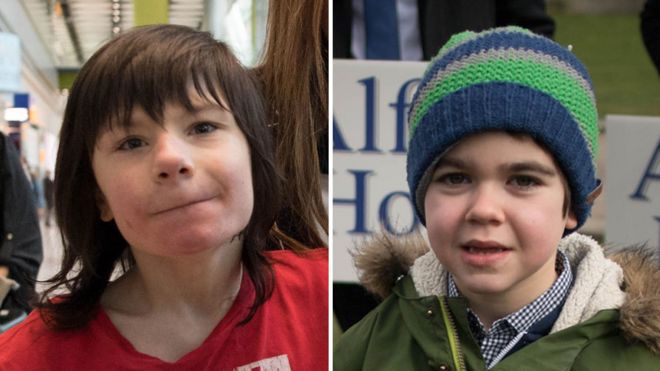 Specialist doctors in the UK will be able to legally prescribe cannabis-derived medicinal products by autumn, the home secretary has announced.

Those that meet safety and quality standards are to be made legal for patients with an "exceptional clinical need", Sajid Javid said.

As it is a devolved matter, it will require legislative change before it is enforced in Northern Ireland.

Many had previously been denied access to cannabis oil.

Others forms of cannabis will remain illegal.

Mr Javid's decision was made after the chief medical officer for England, Prof Dame Sally Davies, and the Advisory Council on the Misuse of Drugs said patients with certain medical conditions should be given access to the treatments.

Their advice was part of a review into medicinal cannabis launched by the home secretary following an outcry over Billy Caldwell and Alfie Dingley being denied access to cannabis oil.

The parents of the boys, who have rare forms of epilepsy, say it controls their seizures. 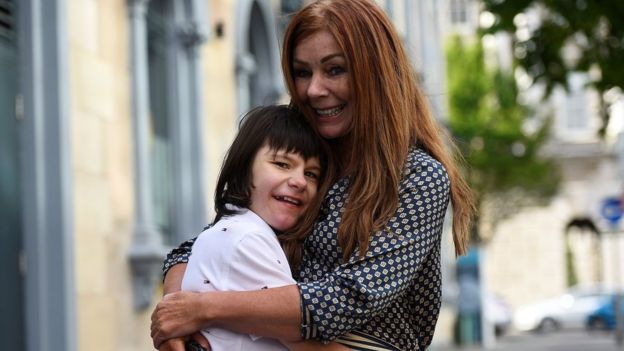 The Home Office recently granted them licences to access the treatments.

Mr Javid said: "Recent cases involving sick children made it clear to me that our position on cannabis-related medicinal products was not satisfactory.

"That is why we launched a review and set up an expert panel to advise on licence applications in exceptional circumstances.

"This will help patients with an exceptional clinical need but is in no way a first step to the legalisation of cannabis for recreational use." 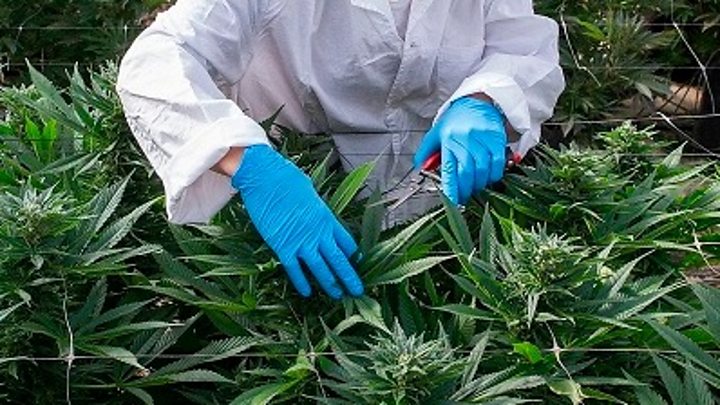 Cannabis-derived medicines: What you need to know

Billy Caldwell's mother, Charlotte, said Mr Javid's announcement had been made on her son's 13th birthday.

"For the first time in months I'm almost lost for words, other than 'thank you Sajid Javid'," she said.

"Never has Billy received a better birthday present, and never from somebody so unexpected...

"But, crucially, my little boy Billy can now live a normal life with his mummy because of the simple ability to now administer a couple of drops a day of a long-maligned but entirely effective natural medication." 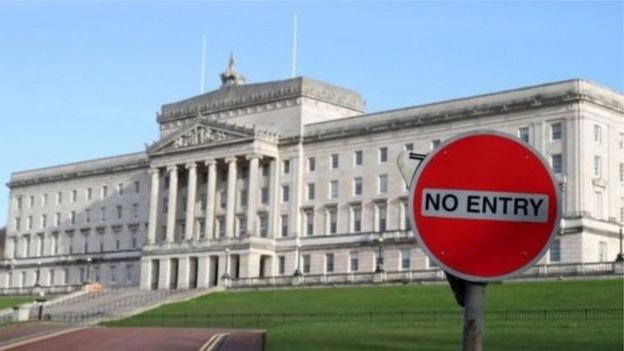 Stormont with a sign saying 'no entry'
Image caption The Department of Health says legalising medicinal cannabis in NI is a devolved matter for local politicians
Image: Pacemaker

A Department of Health spokesperson said: "The rescheduling of cannabis-derived medicinal products is a devolved matter and requires legislative change.

"The Department of Health notes the advice provided by experts during the two-part review commissioned by the Home Secretary.

"In the interim, clinicians may still apply to the Home Office Expert Panel should they wish to use a cannabis-based medicine in the treatment of a patient." 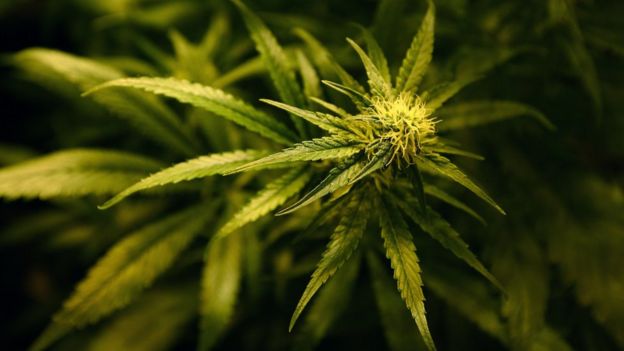 Cannabis is classed as a Schedule 1 drug, meaning it is judged to have no therapeutic value but can be used for the purposes of research with a Home Office licence.

The decision by the Home Office will put certain cannabis-derived products into Schedule 2 - those that have a potential medical use - and will place them in the same category as cocaine and heroin, among other drugs.

The Department for Health and Social Care and the Medicines and Health products Regulatory Agency (MHRA) will now develop a clear definition of what constitutes a cannabis-derived medicinal product so they can be rescheduled and prescribed, the Home Office said.

In the meantime, clinicians will still be able to apply to an independent expert panel on behalf of patients wishing to access these products.

The home secretary said licence fees for applications made to the panel will be waived, and those already granted will not be charged.

The home secretary's decision was welcomed by campaigners and health experts.

Donna Kinnair, from the Royal College of Nursing, said the decision was "very welcome".

Former justice minister Sir Mike Penning, who was among those appealing for Alfie Dingley to be given a special licence for medicinal cannabis, welcomed the announcement but said there were still unanswered questions about which treatments would be rescheduled.

"Any move to restrict medical cannabis in the UK to a very narrow range of derived products, each requiring full pharmaceutical trials, thereby blocking out the many products available overseas, will lead to great disappointment and be a missed opportunity."

Canada Update - Medical Marijuana to be permitted in UK

Following the recent high-profile case of Billy Caldwell, the British Home Secretary announced recently that medical cannabis is to be made available to UK patients on prescription.

Cannabis-derived medicines that meet certain safety and quality standards will be reclassified by fall 2018, so that they can be prescribed by specialist clinicians without the need for a Home Office licence. All fees for permits to use medicinal cannabis are to be waived in the interim. There will be no change in the law on the recreational use of cannabis in the UK, which will remain illegal.

Before any medicinal cannabis medicines could be sold or prescribed in the UK they would, under the current statutory framework, need to receive the relevant market authorisation. In this context, the following steps are relevant.

A marketing authorisation may be obtained from either the UK Medicines and Healthcare products Regulatory Agency (MHRA) or the EU European Medicines Agency depending in part on where the producer wishes to market their medicine: the UK only or throughout the EU.

A Canadian cannabis-based drug manufacturer may need to bring their drug into the UK for clinical trials (see step 3 below). Early engagement with the Home Office in anticipation of any clinical trials may be prudent if a licence for importation is required.

A marketing authorisation will only be issued if clinical trials have proved that the medicine: a) successfully treats the condition it was developed for; b) has acceptable side effects; and c) meets high safety and quality standards.

If granted, initial marketing authorisations are valid for five years, and then may be renewed on the basis of a re-evaluation.

Notwithstanding the changes announced last week, the marketing authorisation process is demanding. Any overseas medicinal cannabis company wanting to take advantage of the recent change in policy would be wise to start ensuring now that it can prove the efficacy of its product.

I also read it is to be legalized and provided with a prescription on the NHS.

It seems like the legal landscape is beginning to catch up with public opinion. Not sure if this is a good thing though

Today I read it is now being prescribed by the NHS by november 2018 - what a time to be alive!
Top


Medical cannabis will be made available to UK patients via prescription from next month, after a long battle with spotlight on children and other patients whose conditions were eased by the substance.

Until now, the drug has been listed as a schedule one drug – the strictest schedule possible – under UK law, limiting medical cannabis to be allowed in only exceptional circumstances and requires a Home Office license to use legally.

The new regime, which moves the drug to schedule two, will apply to cannabis oil that contains THC, the active ingredient that causes people to get “high” when used in a recreational setting. Cannabis oil without THC is already legal in the UK and available in high street shops.

The Home Office is expected to announce the “rescheduling” of cannabis in parliament within the next two weeks, and patients will be able to obtain prescriptions for medical cannabis products within a matter of weeks, according to British media.

The decision to reschedule cannabis comes after a long battle between medical cannabis campaigners and a Conservative Party government reluctant to change laws regarding the drug, despite the UK producing 60 percent of the world’s cannabis for pharmaceutical research.

The fight came to a head earlier this year, after tireless campaigning by mothers of children suffering from rare forms of epilepsy, who found that medicinal cannabis proved the best course of treatment for their children’s conditions over opiate-based medications.

A stand-off between Billy’s mother Charlotte and the Home Office took place in June, after drugs prescribed for him in Canada were confiscated at Heathrow Airport. After Billy’s condition worsened and he was admitted to hospital, Home Secretary Sajid Javid backed down, releasing the drugs and Billy’s condition drastically improved.

Javid’s decision to move ahead with further rescheduling comes following a review by England’s chief medical officer, and will open up possible cannabis treatment to millions of British patients suffering from chronic pain, severe epilepsy or nausea as a result of chemotherapy.

With an estimated 28 million sufferers of chronic pain in the UK, conditions that could be eased with medical cannabis range from conditions such as arthritis to multiple sclerosis.

The MS Society, who penned an open letter to the home secretary in June requesting that MS sufferers be considered under the department’s review of cannabis, believe that as many as 10,000 suffers alone could benefit from the change in law. 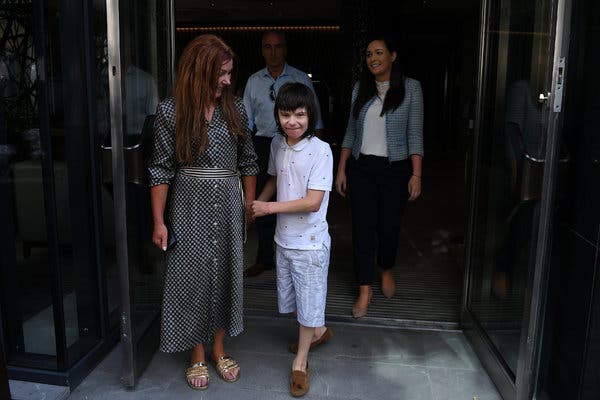 The case of Billy Caldwell, a 12-year-old who has life-threatening epileptic seizures, prompted a national discussion on the legalization of medicinal cannabis products in Britain.
Credit Clodagh Kilcoyne/Reuters


LONDON — Doctors in Britain will be able to legally prescribe medicinal cannabis from Nov. 1, after two highly publicized cases of young, epileptic patients dependent on marijuana-based treatments put pressure on the government to review its policy.

The change was announced on Thursday by Home Secretary Sajid Javid, after he called for an urgent review of cannabis-based medicinal products over the summer, and his office said in July it had decided that “senior clinicians will be able to prescribe the medicines to patients with an exceptional clinical need.”

Mr. Javid said on Thursday, “Having been moved by heartbreaking cases involving sick children, it was important to me that we took swift action to help those who can benefit from medicinal cannabis.”

The home secretary commissioned the review after the cannabis-based medicine of Billy Caldwell, 12, who has life-threatening epileptic seizures, was confiscated at Heathrow Airport on June 11. The case was publicized in the British news media and prompted a national discussion on the legalization of medicinal cannabis products.

Earlier, the mother of 6-year-old Alfie Dingley, who also has up to 150 seizures a month, said that Prime Minister Theresa May had promised to help explore alternative treatments for the boy, but that she never followed through.

“We have now delivered on our promise and specialist doctors will have the option to prescribe these products where there is a real need,” the home secretary said on Thursday.

General practice doctors will not be authorized to prescribe the cannabis-based medicines, the Home Office noted, and prescription decisions will be made on a case-by-case basis — “only when the patient has an unmet special clinical need that cannot be met by licensed products,” the statement read.

The Home Office also clarified that the legalization of cannabis-derived medicinal products did not clear the way toward legalizing cannabis for recreational use. “The penalties for unauthorized supply and possession will remain unchanged,” the office said.

In July, after Mr. Javid said the government would ease restrictions on the cannabis-based products, Billy’s mother, Charlotte Caldwell, told Sky News: “I applaud the home secretary for his swift movements in rescheduling cannabis. To me, now the home secretary is king of hearts.”

In the United States, California became the first state to legalize medical cannabis, in 1996. Currently, 30 states and the District of Columbia have legalized marijuana for medicinal or recreational use. Canada is set to legalize marijuana next week.

A version of this article appears in print on Oct. 11, 2018, on Page A6 of the New York edition with the headline: Britain Eases Prohibition On Medicinal Marijuana.
Top
Post Reply
6 posts • Page 1 of 1