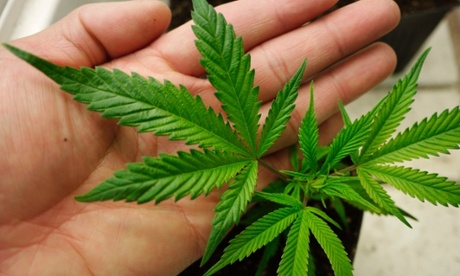 A group of senators and MPs are pushing for the legalisation of medical marijuana to help the sick and potentially provide a new industry for “innovative” farmers. Photograph: ANTHONY BOLANTE/REUTERS

The campaign to legalise marijuana for medical purposes is gathering strength with a group of crossbench senators and MPs pushing for the issue to be top of the agenda in the new parliamentary year.

A private members’ bill has been introduced to the Senate that would see the formation of a regulator to oversee the growing and distribution of cannabis for people with, for example, terminal illnesses or patients undergoing chemotherapy.

The bill is sponsored by Richard di Natale from the Greens, and is co-sponsored by Labor’s Melissa Parke and government backbencher Sharman Stone.

“This is a reform whose time has come,” di Natale told Guardian Australia. “We need national laws on the issue. I’m confident that federally we’ll get some movement on it.”

Stone said: “It’s a no-brainer, quite frankly. I’ll be pushing it, along with Richard di Natale.”

Former Coalition chief whip Warren Entsch is confident the bill will go ahead.

“I don’t expect the [major] parties to come out and openly reject it,” he said. “It’s definitely going to be on the agenda when parliament sits. It’s one of my new year’s resolutions, to get this bill up.”

Neither Labor nor the Coalition would be drawn on how they would vote on the bill, which is expected to be debated in the Senate as early as February.

There is a small chance that the major parties will allow a conscience vote on the issue, though it is more likely that if the bill fails, Labor and the Coalition will work together on drafting an alternative.

Whether it is successful or not, the bill gives impetus to the wider call within parliament to relax the current laws dealing with the use of medical cannabis.

A spokeswoman for the assistant health minister, Fiona Nash, said there was “broad support” for the idea of legalising medical marijuana, and the government would be awaiting the results of a trial planned in New South Wales.

NSW will spend $9m running three trials for the use of the modified cannabis to treat terminally ill patients, children with epilepsy and cancer patients suffering from nausea resulting from chemotherapy.

The prime minister, Tony Abbott, has thrown his support behind state-based trials of the drug, saying in December it was “more state law than federal laws that govern this”.

“We have already got medicinal marijuana that has been approved for use under certain circumstances under the federal regulator,” he said. “NSW wants to put a practical trial in place. I’ve supported this all along.”

Other states are also considering trials. In Victoria, the new Labor government announced it would start clinical trials of the substance just days after winning office in November, paving the way for prescription and distribution.

The Greens are pushing for change to the legislation in ACT, with the release of a discussion paper on the topic.

The vice president of the Australian Medical Association (AMA), Stephen Parnis, said the organisation was supportive of state-based trials but governments “need to make this an urgent issue”.

Labor also supports clinical trials. “This will be important to build conclusive evidence about the safety and relative efficacy of cannabis for medicinal purpose,” the opposition’s health spokeswoman, Catherine King, said.

“Labor therefore believes the issue of medical cannabis needs to be dealt with through a national, evidenced-based approach to both the medical and legal issues,” she said.

Di Natale says pushing for further trials is “a cop out” as the evidence is “crystal clear” that medical marijuana is safe and effective.

Stone said further trials were a stalling technique, and pointed to successful trials in the United States, Canada and Israel.

“It’s crazy to have Australians continue to suffer while we reinvent the wheel,” she said.

The federal government had a role in taking medical marijuana off the illicit substance list, making rules around the importation of the drug and even one day subsidising the cost of the drug using the pharmaceutical benefits scheme, Stone said.

She said legalising medical marijuana could open up a new industry for “innovative” farmers, similar to the existing poppy industry that creates medical opiates.