Comments on specific shops. Use search to find the topic for a shop.
Post Reply
277 posts

Aladdins Wish (16€/g) - A blonde crumbly hash with an awesome smell... again a moroccan hash that
looks like a dry sift hash. That gaves the hash a great smell and taste usually... but the Aladdins Wish is
def. a rare treat. Compared to the OG Roccan from Orig. Dampkring wich smells and tastes more like
the weed it´s made from... the Aladdins smells/tastes much more hashy like a real high quality import
hash. A real full flavor super yammyyy and def. strong for a hash of that kind. It´s not so
crumbly than the OG Roccan for example. It also has a pretty high oil content and bubbles nicely when
heatet by the flame.

Overall a pretty special hash... it smells so yummy with an intense taste that makes my mouth watering...
I can´t compare that new "dry sift like" hashes to the more usual import hashes I smoked in the past... but
what I can say is that this "dry sift" method makes the final product super tasty.
Even if it´s really very nice... 16€/g is heavy! ok it´s a rare treat and well for special hash I pay gladly
a little bit more... I shared their 5g deal with a mate so in the end it was only 12,80€ wich is great

thanks wietzakje for the advice

At first noticed this Aladin's Wish(16€/g)over at coffeeshopemnus.org(Thanks to FlyByNite / -OG_Zine-), also cheers to Wietzakje and Marok21 for reports.
Was told this batch is not as oily as before on the first look but still great.
I could relate.
Saved it for the first smoke of this trip as it was advertized as 'soft green fresh super strong maroc'. Which it wasn't, sorry.
More of an uppish and euphoric thingie.

If you want a bit of strength go to Siberie for strong enough moroccan Tropicana(10€/g).

On the other side taste was great and thick, something new school moroccan.
Look indeed had green hues while being blonde like some of the newer stuff going around lately but still compared to Cookies Cream(18€)from Green Place I had in March which still was 'better' considering the overall package but it is as 'weak' as overpriced as the one from Kadinsky though.

Overall impression: worth a try alone for the taste. Best foreing genetics this time! Kadinsky delivers hashwise as usual

Also had a laugh at a strain for 18€/g which name escapses me now but their Cheese(12€?/g)smelt at least decent.

).
By the way I wrote my review about the Aladin pretty fast after the first try and look... now after I tried it more and so on I saw that it looks more and more (after a while) like a "common" hash... not so super crumbly as the OG Roccan for example. Now in my eyes it has more of a super fresh "classic" foreign genetics hash... the OG Roccan is more like that skuff type I wrote about

yo marok no problem
Searching for the best weed !
Top

Visited today,got Neville's Haze for 13€/g and Caramelo for 10€/g. NH wasn't what I expected,liked the SSH and Red Lemon Haze from the Loft more. Caramelo will get tested later.

Agreed with jesscass and marok21 on the Aladdina wish, not at all that Impressive. Habibi rouge just ok...
Always know where your towel is!

Went here hoping to get the king hasan but they don't sell it any more.

I ended up getting 2 of the recommended hashes - I forgot the names but I believe the bags were labelled H.W and W.H (something like that)

Both were a great solid smoke
Check out My Website www.CannabisWeedMarijuana.com
Top

New menu for Kadinsky dated March 11, 2018. Thanks to Komutan Logar. 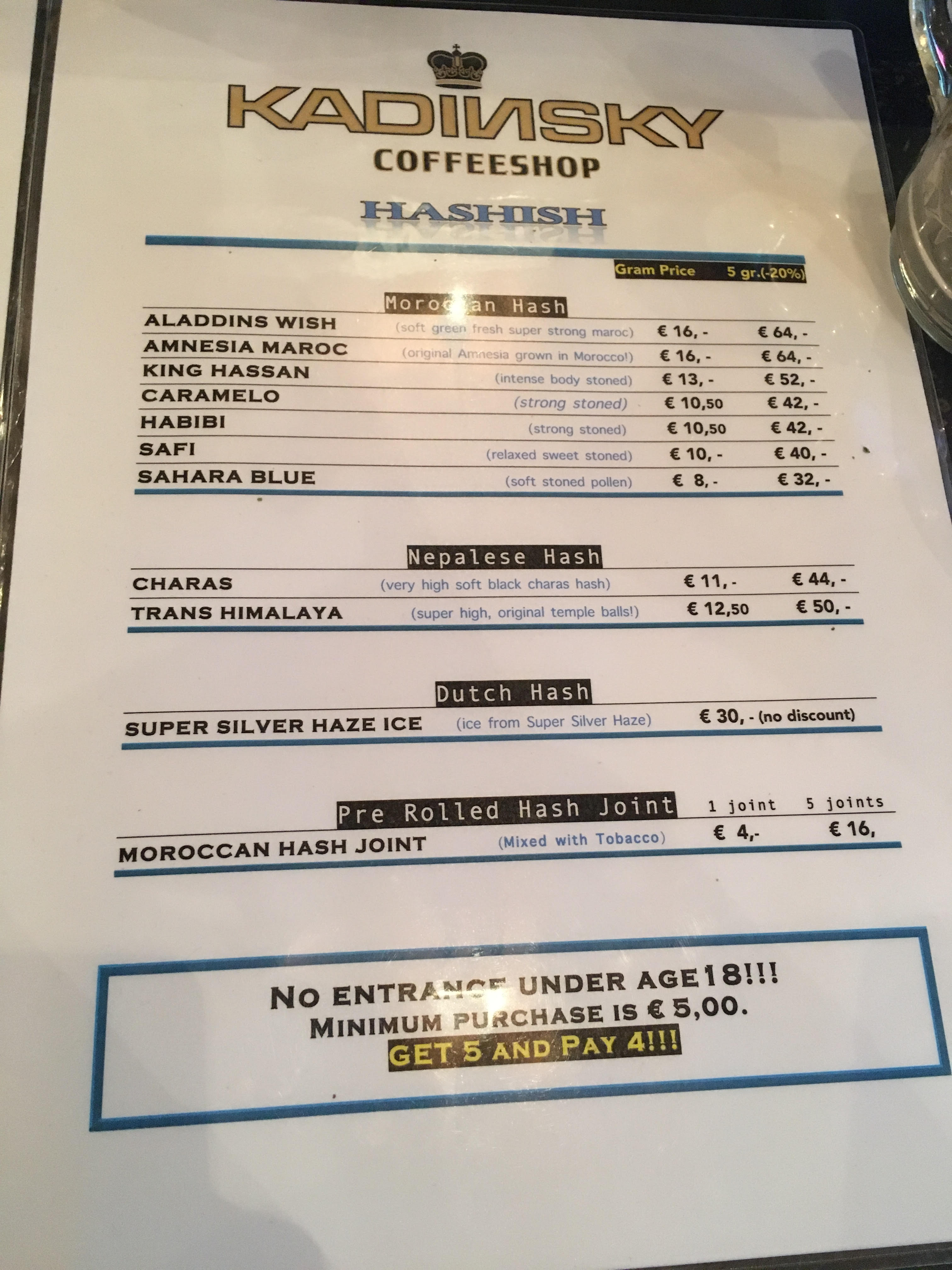 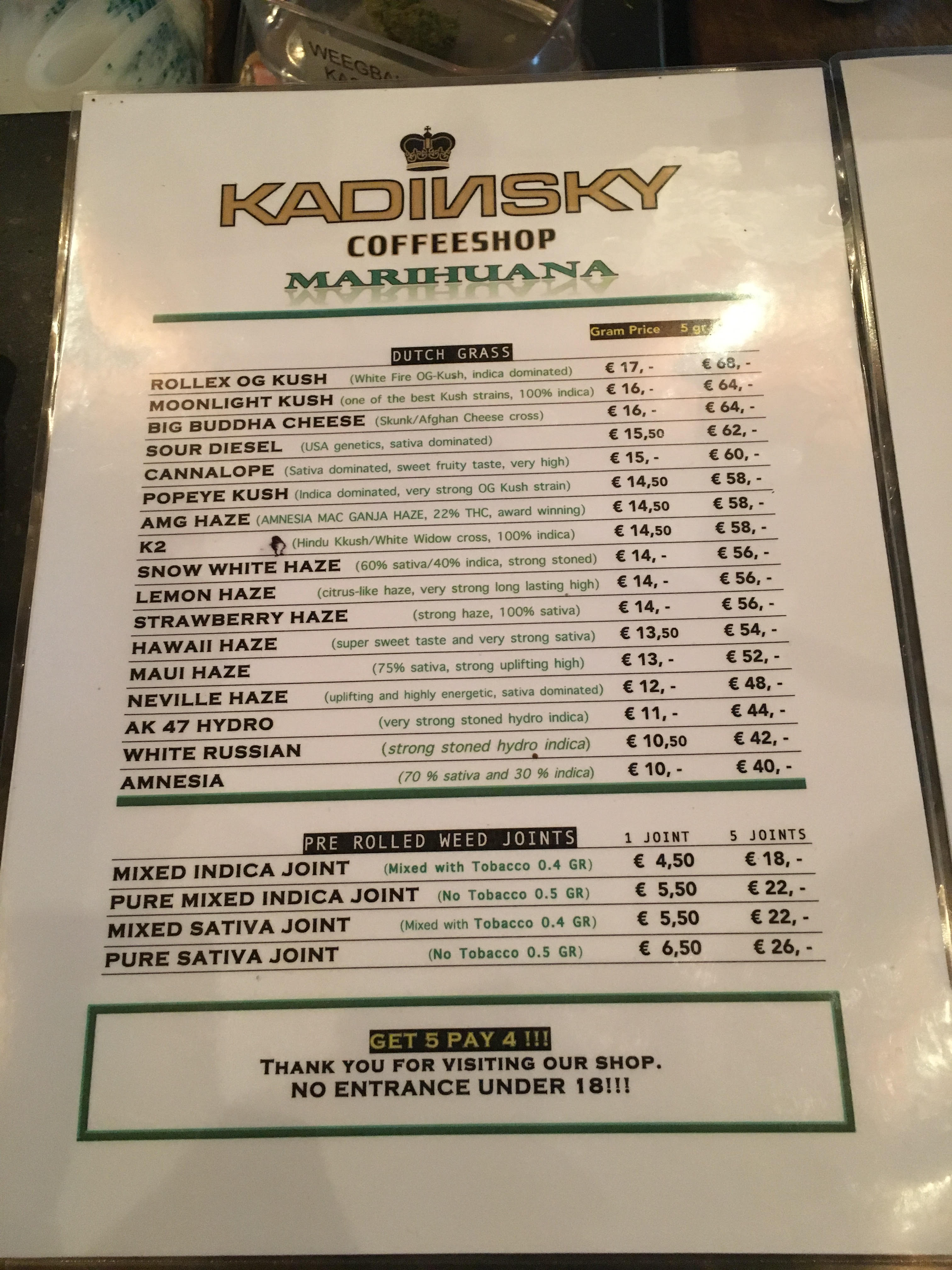 Yeah, I used to love the kadinsky from my earliest trips but its gone quite downhill regarding weed quality. The staff has always been very lovely however.

I've tried amnesia/ak47 hydro and white russian a few times, the quality can greatly varies from batch to batch and that's the main reason I'm not going there anymore. I've only purchased the Neville Haze once but it was very disappointing, perhaps another bad batch ?

Black Dominica(16€/g) was new moroccan resin on the menu. Took a look and it seemed better processed than the one I had the other day at Toermalijn/Tilburg. It definitely was.
Smell and taste were expectably clean. Bonged that away as the first intake of that day but in opposite to genetics supposedly involved I only felt a nice enough but sadly indeed soft high.
Does this mean I have been ripped off two times in a row or something? Too expensive of course! Shitty name game as usual.
Top

this is the one off damrak by kfc

The Temple-Balls isn't that bad, tbh... Yeah, it's not up to the par it was around 7-8 years ago, especially regarding it's freshness and visual appeal, but the effect is still pretty decent... It's so different to the high you get with pretty much everything else on offer... A far more relaxing and thoughtful high than most wares available in Mokum... Worth trying a gram!
https://www.youtube.com/channel/UCcbWTx ... Q5DNeIf-CA
Top

KeyMonCha wrote: ↑Mon 23rd Jul 2018 11:00 am The Temple-Balls isn't that bad, tbh... Yeah, it's not up to the par it was around 7-8 years ago, especially regarding it's freshness and visual appeal, but the effect is still pretty decent... It's so different to the high you get with pretty much everything else on offer... A far more relaxing and thoughtful high than most wares available in Mokum... Worth trying a gram!

will have a look next time...last month it didnt look or smell great but as you say tings change

Indeed it was... And it set my expectations so high for quality, they haven't been satisfied since...