Comments on specific shops. Use search to find the topic for a shop.
Post Reply
36 posts

I like this. It's the only example I've seen of Google Streetview inside a coffeeshop. If you 'walk' up to the dealer's counter at the front you can even read the menu!

Shop looks good on the pics, products seems nice too, if marok or Jess get around let us know

I know marok was lookin for nougat, he's around

It is known to be more of a hash shop, but lately (for a year or something) they focus more on the modern weed

I like them, and they do get decent batches of weed (mostly white, but also kush, and haze). But I don't go there often, and if I go I go for the top hashes and not the green... Friends say they have good weed though. If you are in town, just check the products out, you might find something nice. The top hash is always good/decent, and the top hashes over here in Nijmegen are max 10 euro's a gram, though Kruidentuins top hash is 12,50 a gram and worth it.

I think it's good to understand that this shop is in a very popular tourist coffeeshop district, with looooots of German and Belgian customers every day and every night. Not every city close to the border sells to people from other countries (you know wietpas), but here they can, so there are lots of tourists over here to score. The shops can and will sell everything that looks and smells like hash and weed, because of the overload of tourists. Please be aware of that, and really check the gear before you buy anything. There is definitely good gear going around, but also an incredible amount of total worthless crap.
Top

In general: know this shop way before it merged with moroccan Labda, which Marok21 and me reported on here when this happened last year due to mayor Bruls wanting to have less coffeeshops in neighborhoods but most of them located in the centre of town.

Excellent idea! On one hand bit far from reality as it seems he's enjoying more overlast in the centre and on the other hand it's bizarre that both owners asked for that(they now have to share their profit and gave up one licence).

Maybe Labda's licence shouldn't have been renewed anyway? No one asked wanted and/or could shed some light on that.
Doesn't make much sense to me and is another odd move in dutch coffeeshop history.

Especially since they had a refurb but didn't change the name of the shop to mark that change for their customers( http://nieuws.nijmegenonline.nl/coffees ... -t-kunsje/ ).

Also it seems friendly tomcat of Labda was left behind but can relate and hope he's okay.
The shop itsself is bright and medium sized with about 30 seats including a billard table.
Except for the bar stools relatively comfortable but can get smoky in there though.

Watch what's happening on so called social media with coffeeshops since a couple of years(or mugs selling their gear as buying there ; never forget which groups mosty own so called social media, ridiculously unsafe to say the least but each to their own I guess. Same with fora, no matter how safe one feels behind a computer. ),
fingers crossed they get closed down for that by the authorities one day as firstly advertizing any drugs in general is just irresponsible in my humble opinion and secondly coffeeshops are indeed not allowed to do it anyway(is this forum advertizing drugs? To some point surely, but in the end it's an adult forum, right? Also mostly personal content here).

So for the record personally when they post something new(lets say even limited quantity) I don't care at all nor does this trigger me to set a trip up as I'm not visiting Nederland and especially coffeeshops exclusively for tracking down the holy grail of fuck knows as said before ; those days are long, long gone since ages due to several reasons among extensive personal experience with all aspects of this plants already, so all about having a nice time there and everything else is just bonus( which I wouldn't mind of course).

Also am no jukebox but see your good intention.

Anyway! Read your post here but there was a trip planned before as we went a lot to Gelderland in general recently and T'Kunsje is a regular visit again since their merge with Labda one way or the other.

Thing is again that this Ketama Gold clearly wasn't the stuff they showed on their social media(which was that type of blonde crumbly hash popping up a lot recently respectively not the one they sold us on that trip) but still a quite nice piece of blondish moroccan hashish.

Still they fooled their customers(Boerejongens springs to mind too doing so before as reported), also their buds were not looking like the stuff online but only looked at a few tubs I can't remember the name of, probably newer strains.

They also had Gorilla Glue#4 for under 10€/g on but I already saw enough bullshit so didn't care. Fuck them for their dishonesty!
Though all hashish bought there that time was still spot on again qualitywise, Kush Block and Amnesia like the stuff Boerejongens chain and others sell.

Agreed. Wondering since years why this oligopoly decided for that stable price plateau. Probably due to being an university town and many young people around. On the other hand most wiet is laughable apart from the occassionally good grown haze, at least you're not getting too ripped off.

Have to say mostly focus on mighty Kruidentuin, though won't report as stated before for good reason but do regulary inspection rounds in town as other moroccan establishments for variety as Lucky Luke(not so much but ok enough), Headshop, Ketama(their Special changes realtively often and is always worth a look)
and even that dreadful shithole of a coffeehop which is Jamaica, which is selling not only horrendous sprayed wiet(apple/strawberry flavour)but fine classic moroccan hashish, deserve a mention.

Also am with you when it comes to Thc in Arnhem ; unfortunately their consistency dropped a bit in the last years but one will find something worth there. Tend to offer rare types of oldschool moroccan hashish sometimes you haven't come
across for years(not saying it's as old and stale then).
De Walm's moroccan hash is also spot on, also consistency in the last years and best price/performance ratio in town(about 9€/g), although new batches and flavours around lately but still at least nice enough, wiet also! Both Upstairs(also wiet) and Uncle Sam every now and then.
Since it's about 10mins away from Nijmegen it is on the list every trip more or less, would be rude not to ; wiet is better there but overpriced as well..
Top

New menu for a new shop to us tKunsje in Nijmegem dated November 30, 2017. Thanks to dreaminjection.

The menu looks pretty good especially for a coffeeshop in a border area... but I didn´t think that they have legit strains... a mate was there a month ago and tried their Gorilla Glue which was good but not like Gorilla Glue he knows

He also had the Kush Block hash and a hash called "Rif King" for 12€/g from them. The Kush Block was sold in this small boxes like Boerejonens do and well it also looked pretty similar to the first versions of Block hash from Boere..

Furthermore they and a few other shops in Nijmegen had Moonrocks on their menus, too (around 40€/g)... which is pretty interesting for coffeeshops in a border region... usually shops in this area have only WW, Nothern Lights and Amnesia

In the end my mate was happy with his purchases even if it seems like not every strain on the menu is legit but of clean quality... also the prices are still ok... T Kunsje is for me one of the best shops in Nijmegen and in the border area in general.
Top

New menu for t'Kensje in Nijmegen dated March 21, 2018. Thanks to dreaminjection. 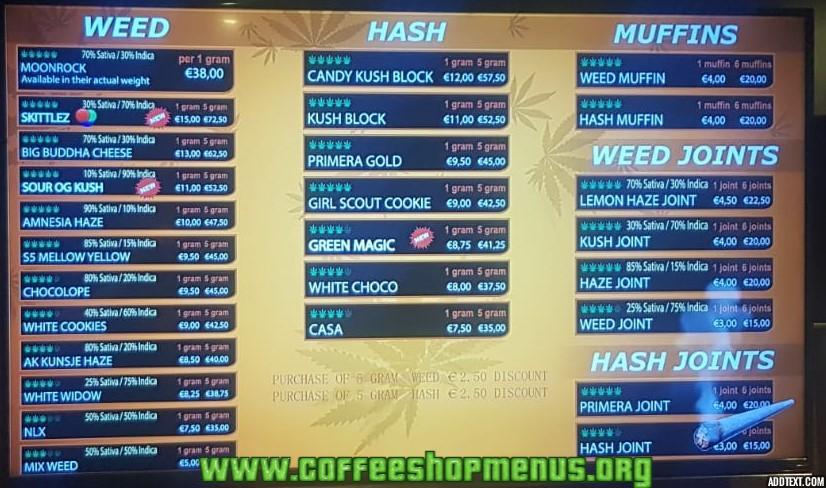 i had the white cookies about 2 months ago
absolutely awesome weed for 09 !!!!
wouldve costed atleast 16 at eerstehulp lmao
Relax and take notes , as I take tokes of the marihuana smoke
Top

I have to agree with Rvan, I tried the white cookies 2 times this month and both times it was good looking nugs, the flavour and the high were really decent for the price. Definitely beats out a lot of 10+ euros strains in Amsterdam coffeeshops! I also liked their white widow, which had more taste than the ones I remember from A'dam.
Top

New menu for t'kunsje in Nijmegen dated December 8, 2019. Thanks to Dreaminjection. 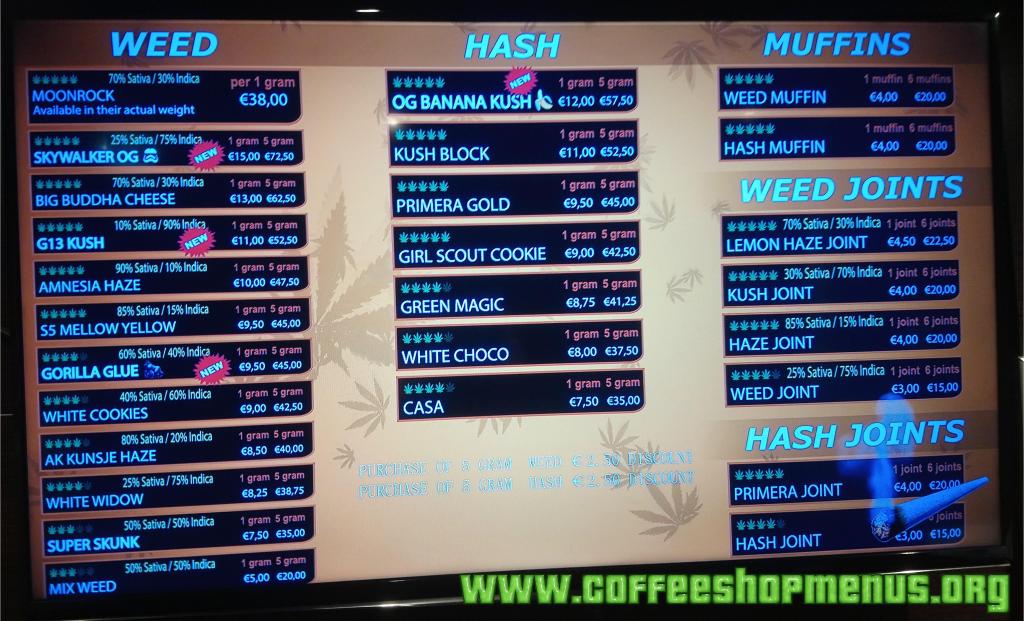 I went here with Kingbee a few days ago

I tried their Gorilla Glue (9,50€/g) weed because it was the advice of the dealer. Unfortunately, I can not remember exactly how it looked

but it was really sticky and smelled strong when grinded up. Didn´t smoked much Gorilla Glue in the past so I am not really sure if it was the real "Gorilla Glue" but that strong smell reminds me of some Gorilla Glue that I tried from Coffeeshop Utopia (Rip) years ago. Strong weed especially for that price.

The Coffeeshop itself seemed to be pretty crowded but the staff was anyway very friendly. We had a nice chilled time there... as the menu shows above they have a quite big menu for a coffeeshop in that area. Well I am no regular customer here but it looks still to me that they are one of the best places in the border area.
Top

kingbee wrote: ↑
Fri 13th Dec 2019 05:42 pm
The owners are an extended Moroccan family, it seems, and were quite friendly, especially the 'lady of the house'.

In the past Coffeeshop T´Kunsje merged with Coffeeshop Labda Labda (RIP) which was owned by moroccans. Since they did that their menu
seems to be a lot bigger