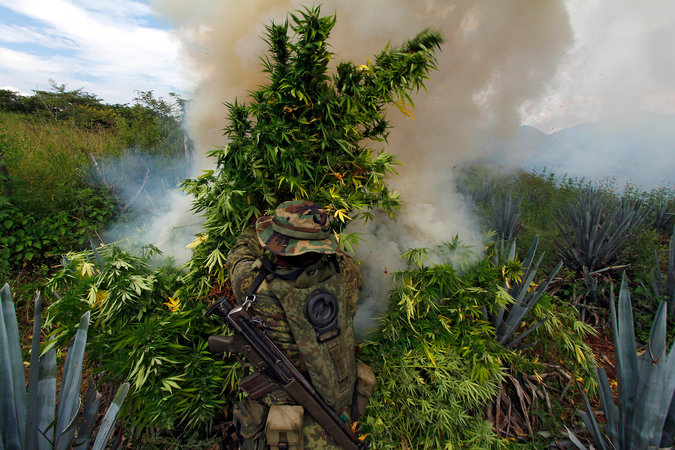 
The Mexican Supreme Court opened the door to legalizing marijuana on Wednesday, delivering a pointed challenge to the nationâ€™s strict substance abuse laws and adding its weight to the growing debate in Latin America over the costs and consequences of the war against drugs.

The vote by the courtâ€™s criminal chamber declared that individuals should have the right to grow and distribute marijuana for their personal use. While the ruling does not strike down current drug laws, it lays the groundwork for a wave of legal actions that could ultimately rewrite them, proponents of legalization say.

The decision reflects a changing dynamic in Mexico, where for decades the American-backed antidrug campaign has produced much upheaval but few lasting victories. Today, the flow of drugs to the United States continues, along with the political corruption it fuels in Mexico. The country, dispirited by the ceaseless campaign against traffickers, remains engulfed in violence.

â€œItâ€™s the drama behind all of our efforts,â€ said Juan Francisco Torres Landa, a corporate lawyer who was one of the plaintiffs in the Supreme Court case.

The marijuana case has ignited a debate about the effectiveness of imprisoning drug users in a country with some of the most conservative drug laws in Latin America. But across the region, a growing number of voices are questioning Washingtonâ€™s strategy in the drug war. With little to show for tough-on-crime policies, the balance appears to be slowly shifting toward other approaches.

Uruguay enacted a law in 2013 to legalize marijuana, though the creation of a legal marijuana industry in the small country has unfolded slowly. Chile gathered its first harvest of medical marijuana this year. In Brazil, the Supreme Court recently debated the decriminalization of marijuana, cocaine and other drugs. And Bolivia allows traditional uses of coca, the plant used to make cocaine.

Many leaders in Latin America have called for a shift in policy, including President Juan Manuel Santos of Colombia. In May, his government ordered a halt to the aerial spraying of illegal coca fields, rejecting a major tool in the American-backed antidrug campaign because of concerns that the herbicide spray causes cancer.

Though Mr. Santos is one of Washingtonâ€™s closest allies in the region, he has pointed out the incongruity of jailing poor farmers for growing marijuana while it is slowly being decriminalized in the United States.

â€œEvery country in the world signed up to a treaty that prescribed a prohibitionist and criminalized approach to dealing with drugs that was one-sided,â€ said John Walsh, a senior associate at the Washington Office on Latin America, a human rights group. â€œThat basic response doesnâ€™t work anymore.â€

Mexicans seeking a new strategy have also been struck by the situation. â€œWe are killing ourselves to stop the production of something that is heading to the U.S., where itâ€™s legal,â€ said Armando Santacruz, another plaintiff in the case.

till, few think that legalizing marijuana will significantly reduce drug violence or weaken the gangs.

Although the rising production of higher-quality marijuana in the United States reduces demand for Mexican imports, experts say that Mexican gangs continue to account for an important percentage of the American supply.

As it stands, marijuana accounts for more than a fifth of revenues generated by cartels, around $1.5 billion a year, according to a 2010 report by the RAND Corporation.

The one thing that could significantly affect the cartelsâ€™ marijuana business is legislation in the United States. As marijuana growing for commercial purposes in America expands, demand for Mexican marijuana could eventually dry up.

Pro-marijuana activists have scored a remarkable string of election wins in recent years even though the drug remains illegal under federal law. Twenty-three states and the District of Columbia have passed laws permitting medical marijuana, and four states also allow recreational use by adults.

â€œIn the long run, as the U.S. legalizes marijuana, Mexico is going to have a tough time competing with lawful American suppliers,â€ Mr. Walsh said. â€œThat doesnâ€™t mean they wonâ€™t have a business plan, itâ€™s just that marijuana will be removed from it.â€

Marijuana is just one of many sources of income for the cartels, which smuggle narcotics across the border to the United States and run kidnapping and extortion rings at home. The criminal infrastructure will persist whether or not marijuana use is legal.

The move by the Mexican Supreme Court's criminal chamber lays the groundwork for a wave of legal actions that could rewrite the nation's drug laws.

With little to show after years of tough-on-crime policies, countries in the Western Hemisphere have enacted laws allowing some marijuana use.
Uruguay, Chile and more than 20 states in the U.S. have passed laws allowing medical or recreational use.

The rate of marijuana use in Mexico is low and most Mexicans oppose legalization. The U.S. is the main market for marijuana grown there.
The trade is controlled by violent criminal gangs who also make money from other drugs, kidnapping and extortion.
Experts say legalizing marijuana would do little to diminish their power.

The legal ruling on Wednesday barely referred to the bloody backdrop of the drug war. Instead, Justice Arturo ZaldÃ­var wrote an 88-page opinion based on principles of human rights, arguing that the state recognizes an individualâ€™s autonomy to engage in recreational activities that do not harm others.

The number of marijuana users in Mexico is believed to be small. One 2011 drug-use survey estimated that 2 percent of Mexicans had smoked marijuana in the past year. Although that figure is probably low, it is less than the 7.5 percent of people in the United States who said in a 2013 survey that they had used marijuana in the previous month.

If Mexicans are allowed to grow and consume their own marijuana, casual users will not have to commit a crime to obtain it. Now, marijuana users are currently vulnerable to extortion by the police and are locked up by the thousands every year on charges of consumption and possession.

â€œThere is an enormous institutional and social cost to enforcing the laws against marijuana,â€ said Ms. PÃ©rez Correa, whose surveys of state and federal prisons suggest that 60 percent of the inmates sentenced for drug crimes were convicted in cases involving marijuana. â€œHow many resources are being used up to reduce these low-impact crimes?â€

The ruling on Wednesday was the culmination of an effort to change the law by four members of a prominent Mexican anticrime group, Mexico United Against Crime.

Mr. Torres Landa and Mr. Santacruz formed an alliance with two other people, called the Mexican Society for Responsible and Tolerant Consumption â€” the Spanish acronym is Smart. Their group applied for a license from Mexicoâ€™s drug regulatory agency to use marijuana, but, as expected, was turned down. Their appeal of that decision eventually reached the Supreme Court.

Yet the ruling on Wednesday applies only to their petition. For legal marijuana to become the law of the land, the justices in the courtâ€™s criminal chamber will have to rule the same way five times, or eight of the 11 members of the full court will have to vote in favor.

If the court decisions continue in that direction, they will be flying in the face of public opinion. Mexicans are so opposed to legalizing marijuana that a leading pollster told the Smart group not to bother with a survey, Mr. Santacruz recalled, or to limit it to young people.

But AdalÃ­ Cadena Rosas, 20, a pharmacy worker in Mexico City, bemoaned the decision on Wednesday. â€œI mean, we already have so many drug addicts,â€ she said. â€œThis is only going to make things worse.â€

On the other hand, Carlos Canchola, 87, a retiree, rejoiced when he learned of the ruling.

â€œThis is great news,â€ he said. â€œPeople like me will be able to acquire it for rheumatism.â€

President Enrique PeÃ±a Nieto said his government would respect the Supreme Courtâ€™s decision, but his government, legislators and security and health officials all oppose legalization, as does the Roman Catholic Church.

Mr. Santacruz is determined to change minds. Invoking the specter of Mexicoâ€™s most notorious drug kingpin, JoaquÃ­n GuzmÃ¡n Loera, known as El Chapo, he likes to remind people: â€œBad regulation is better than whatever regulation El Chapo and the narcos can provide.â€

A version of this article appears in print on November 5, 2015, on page A1 of the New York edition with the headline: Ruling in Mexico Sets Into Motion Legal Marijuana.