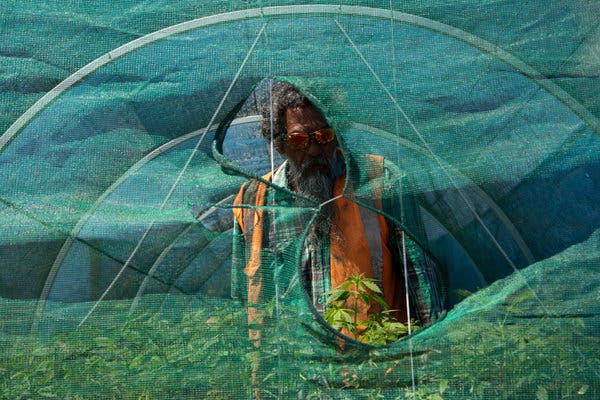 Hemp plants being grown near Ruatoria, New Zealand. A law passed this month will ease restrictions on medical marijuana in New Zealand, and the government now says the public will vote in 2020 on legalizing recreational use of the drug.
Credit: Cornell Tukiri for The New York Times


WELLINGTON, New Zealand — New Zealand is known for its tourism campaigns emphasizing what a clean, green country it is, and after 2020 it might be even greener: A referendum will be held that year on whether recreational cannabis use should be legal, the justice minister said on Wednesday.

It appears that New Zealand would be the first country to put the issue to a nationwide vote.

Andrew Little, the justice minister, said the referendum would be on the ballot during the next national election, due to be held in 2020. He told reporters that the results would be binding, though he said there was still “a bit of detail still to work through,” particularly regarding how the question would be worded.

The announcement came a week after New Zealand’s Parliament passed a law that will ease restrictions on medicinal marijuana.

Public opinion in New Zealand has become more supportive of recreational cannabis use in recent years; an October poll by 1 News found that 46 percent of those questioned favored legalizing the drug, while 41 percent were against. The poll questioned 1,006 eligible voters and had a margin-of-sampling error of 3.1 percent.

“That’s because of two things — the advancement in the medicinal cannabis regime and the law just being passed, and also just that gathering sense of global opinion that the war on drugs is lost and that the health approach is the one to take,” she said.

If more than half of voters taking part in the referendum support legalization, New Zealand will join a handful of countries that have legalized marijuana use outright, including Canada and Uruguay; in the United States, several states have also legalized it. Dozens of other countries and states have decriminalized recreational use, legalized medicinal cannabis or eased enforcement of possession laws.

Figures from New Zealand’s Ministry of Health said that in 2015, about 8 percent of the people acknowledged having used cannabis in the previous year. Small-scale, personal use is largely ignored by the police, although as in the United States, studies have shown that minorities are more likely to be arrested and prosecuted for it.

New Zealand is known as being socially liberal, with previous governments having decriminalized prostitution and legalized same-sex marriage. But neither of the two major parties, center-left Labour — which leads the current government — or center-right National, had previously been willing to touch the issue of recreational marijuana. 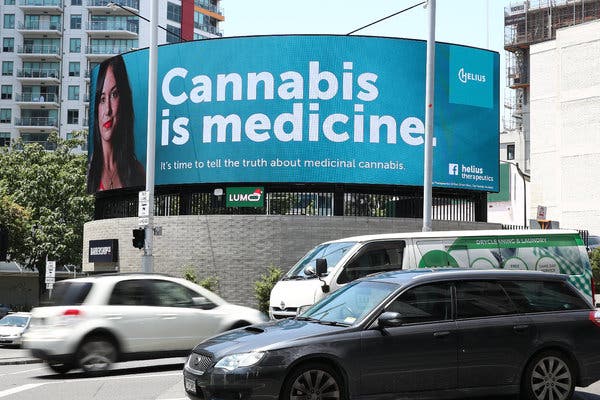 A billboard for Helius Therapeutics, a licensed medical cannabis company, in Auckland. Public opinion in New Zealand has been moving toward acceptance of recreational marijuana use.
Credit: Fiona Goodall/Getty Images

But Labour’s hand was forced in negotiations after the September 2017 election, during which neither major party won enough seats to govern outright. To win the support of the left-leaning Green Party — one of two parties that have given Prime Minister Jacinda Ardern the majority she needs to govern — Labour agreed to put cannabis legalization to a public vote.

“Politicians are the most risk-averse group of people that I have ever met,” said Chlöe Swarbrick, a Green Party lawmaker who has advocated legalizing cannabis.

There had not previously been “the will to invest in evidence-based policies” on controversial issues like marijuana, she said.

Ms. Swarbrick said the Green Party hoped the government would pass a law before the referendum that spelled out how legalization would work, giving “clarity and certainty about what New Zealanders are actually voting for.”

“It means we don’t end up with a Brexit-type situation when we’re trying to figure out what a ‘yes’ vote actually means,” she said.

Mr. Little, the justice minister, told Radio New Zealand in May that while holding the referendum during the 2020 election would be convenient, since voters would already be heading to the polls, some of his colleagues would not want the issue dominating an election campaign.

But voters’ attention could be split even further, with cannabis unlikely to be the only issue up for a public vote. Mr. Little has indicated that a referendum question about euthanasia might also be on the 2020 ballot, along with a third on a possible change to New Zealand’s mixed-member proportional electoral system.

Commentators said it was unusual to have so many social issues up for debate at once. The government is also considering easing laws on abortion, which is criminalized in New Zealand but is generally allowed if a woman has the approval of two doctors.

She said the Labour and Green parties would hope for a strong turnout among young voters who favor legalizing marijuana, while a vote on the euthanasia issue would be likelier to mobilize older voters.