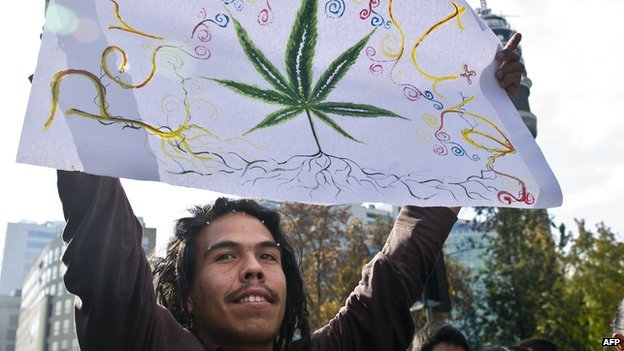 A new TV channel has gone on air in Chile with the aim of winning support for the legalisation of cannabis.

Cultiva TV will broadcast once a week, and wants to persuade viewers about the alleged "medicinal, cultural and spiritual" benefits of marijuana. It's being run by a plant feed and cannabis equipment company called Pos240, the Santiago Times reports. Its first episode saw the Cultiva team visit Amsterdam and Barcelona to investigate European approaches to regulation. They also interviewed a Chilean sufferer of muscular spasms, who says medical marijuana treatment alleviates her symptoms to the extent that she now competes in indoor climbing championships - without any of the side effects of conventional treatment. Cannabis remains a Class A drug under Chilean law, although there is some leeway for individual consumption and the sale of seeds. Cultiva TV's programme opens with a statement saying it doesn't advocate illegal activities.

Chile has among the highest figures for marijuana consumption in Latin America, at 4.2% of the population, according to the country's narcotics agency. "There's a revolution brewing," says Cristian Ansaldo, the director of Pos240. "It's more than probable that from here in Latin America a global change towards home-growing will lead to a noticeable reduction in cannabis smuggling."