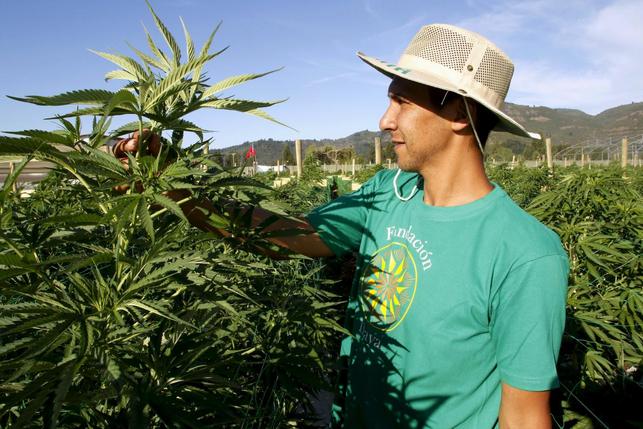 A worker inspects a plant at a medicinal cannabis plantation, part of a project by the Daya Foundation non-governmental organisation, in rural Quinamavida near Talca, Chile, January 18, 2016.
Reuters/Sebastian Martinez 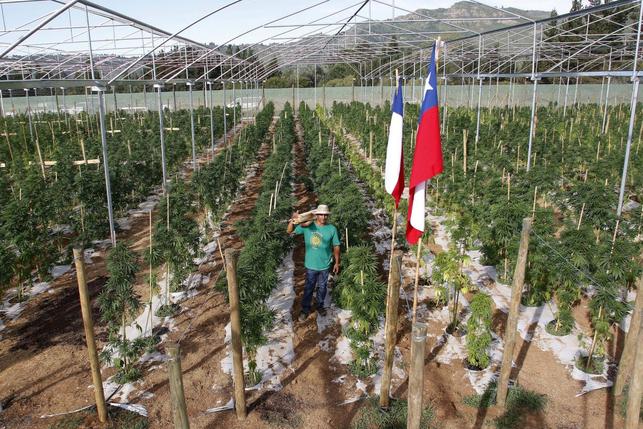 A general view of a medicinal cannabis plantation in Latin America, part of a project by Daya Foundation non-governmental organisation, in rural Quinamavida near Talca, Chile, January 18, 2016.
REUTERS/Sebastian Martinez 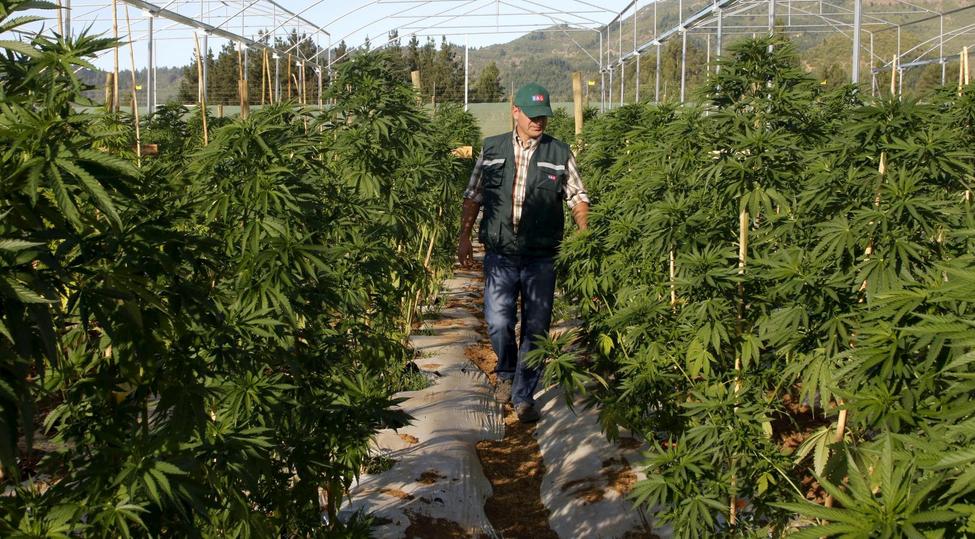 A man walks through a medicinal cannabis plantation, part of a project by Daya Foundation non-governmental organisation, in rural Quinamavida near Talca, Chile, January 18, 2016.
REUTERS/Sebastian Martinez

The 6,900-stalk plantation, located in the small town of Colbun, some 275 kilometers (170 miles) south of Santiago, will help treat some 4,000 patients from across Chile, organizers said.

This project follows on the work of a smaller, experimental plantation at a secret location in the capital, Santiago, and comes as Chile's Congress debates the decriminalization of small amounts of marijuana for personal use and cultivation.

The head of the foundation behind the project, Ana Maria Gazmuri, said opinions about the use of cannabis were shifting in traditionally conservative Chile.

"This farm will further permit people to see for themselves the reality of the plant, and what its uses are," Gazmuri, a 1980s TV soap opera star and advocate of "holistic" medicine, told Reuters.

Project organizers hope to harvest 1.5 tonnes (1.65 tons) of marijuana between March and May, under the supervision of the government's agricultural service.

Organizers told La Tercera newspaper they will be working with a variety of laboratories and universities to develop cannabis-based therapies that can help patients with chronic pain, complications from cancer and epilepsy, among other conditions.

In 2013, Uruguay moved to fully legalize marijuana, a pioneering step that has been watched closely across the globe.

A Mexican court ruling in November opened the door to limited amounts of legal cannabis cultivation. Colombia's President Juan Manuel Santos in December signed a decree that legalized medical marijuana, which he said does not weaken the government's fight against illicit crops and drug trafficking.

Gazmuri said some government officials had opposed the initiative, delaying its approval and causing headaches for her group.

But she added that despite Chile's conservative reputation, there were signs that attitudes were changing, at a time when the center-left government has been pushing for reforms to abortion and same-sex civil unions.

"Regarding marriage equality, regarding cannabis, regarding abortion - the majority opinion is in favor of securing these rights," Gazmuri said.


(This version of the story correct figure in paragraph 6, to 1.5 tonnes from 1.5 million tonnes)


Latin America's largest farm growing marijuana for medical use, located in southern Chile, has begun its harvest. Sponsored by the Daya Foundation, a not-for-profit organization dedicated to alleviating human suffering, it hopes to pick 1.5 tons of the plant by mid-April.

“If you think that to make a joint, you use half a gram, we have enough to make three million joints,” jokes Pablo Meléndez, director of operations. “With one for every six people, that's enough for the whole of Chile.”

Meléndez oversees the progress of the 6,400 plants seeded last November in this field in Quinamávida, 320 kilometers south of the Chilean capital of Santiago.

“It’s an unprecedented initiative in the region,” says Daya's Ana María Gazmuri, who is supervising the project. “Despite not having the most advanced legislation, Chile is a pioneer among Latin American countries,” she adds.

The medicines produced from the marijuana will be used to treat around 4,000 patients suffering from chronic pain

Uruguay is the only country in the world that has fully legalized marijuana.

With no airports nearby, accessing the farm is not easy. From Santiago, it’s a 300-kilometer drive south to the city of Linares. From there, the road twists and turns, requiring several phone calls to the hosts for directions.

The smell from several meters away is intense. The entrance leads up to a steep dirt road and sentry box where a guard asks for visitors’ details. Finally, the crop comes into view: one hectare of marijuana plants perfectly lined up waiting to be harvested.

The Daya Foundation cultivates 16 varieties of marijuana and has established several security measures to prevent theft: guards patrol 24 hours a day, and there is an electrified fence, a dog, security cameras and direct lines to two police stations in the area. “But we've found there is a certain level of social awareness when it comes to plantations for the sick,” says Gazmuri.

Around 60 locals have been hired to help with the harvest and kitted out with protective suits and gloves. They cut, wash, and then hang the plants in drying sheds. They are then ground up and analyzed by Chilean pharmaceutical company Knop Laboratorios. “It will be the first plant-based medicine made from cannabis produced in Latin America,” says Nicolás Dormal, the farm’s director.

About 20 Chilean municipalities have financed the project. The medicines produced from the marijuana will be used to treat around 4,000 patients suffering from cancer, epilepsy and the chronic pain caused by arthritis and multiple sclerosis.

Representatives from Argentina and Brazil regularly liaise with Daya to study its production and management model. “People also come from Australia and California and are dumbstruck by what they discover,” Gazmuri explains, adding that marijuana cultivation for medical use is set to “take off” in Latin America. “Colombia has just legalized medical use, Costa Rica is trying, Uruguay just began its first production.”

Chilean law does not ban cultivation or consumption of marijuana, but selling the drug is illegal. “There was the mentality here that we couldn't do this. Many conservative sectors of Chilean society should be asking themselves how we were able to score this important goal,” Gazmuri says.