Comments on specific shops. Use search to find the topic for a shop.
Post Reply
540 posts

Now that was funny. Went there and it wasn‘t crowdy at all. While I waited for the budtender to serve two customers I was standing close enough to the budtender area so could see tubs well.
First he opened Red Cherry Berry(12€/g)which looked schwaggy and smelt like nothing(tub more or less under my nose!)which he sold to them. Next one was Pineapple Chunk(16€/g) which smelt really ordinary skunky but not like pineapple(recommed homegrown Pineapple Punch for that one

), also looking subpar but still was sold to them. Then Vanilla Kush was opened and smelling like nothing with tiny buds but hey at 15€/g it‘s a steal so they went for it.
Then it‘s me who gets served next so ask for sold out Turkish Delight(19€/g)and budtender tries to sell me his Liberty Haze(17€/g)which looked and smelt sort of a nice example of Amnesia but decided to run away then

Only in here to pick up a few things at the weekend, busy as norm, but bought a few -

Liberty Haze - Must of sold all the good batch, as was not as experienced before 5/10
Cookies Cush - Feck me, mind blowing, best weed smoked in past 5 for its purpose. Total couch lock

But all at a price,

This farm is exceptional at producing good solid strains, just have to be disappointed with the Liberty this time round.
Top

@Cannabis, Do not read this 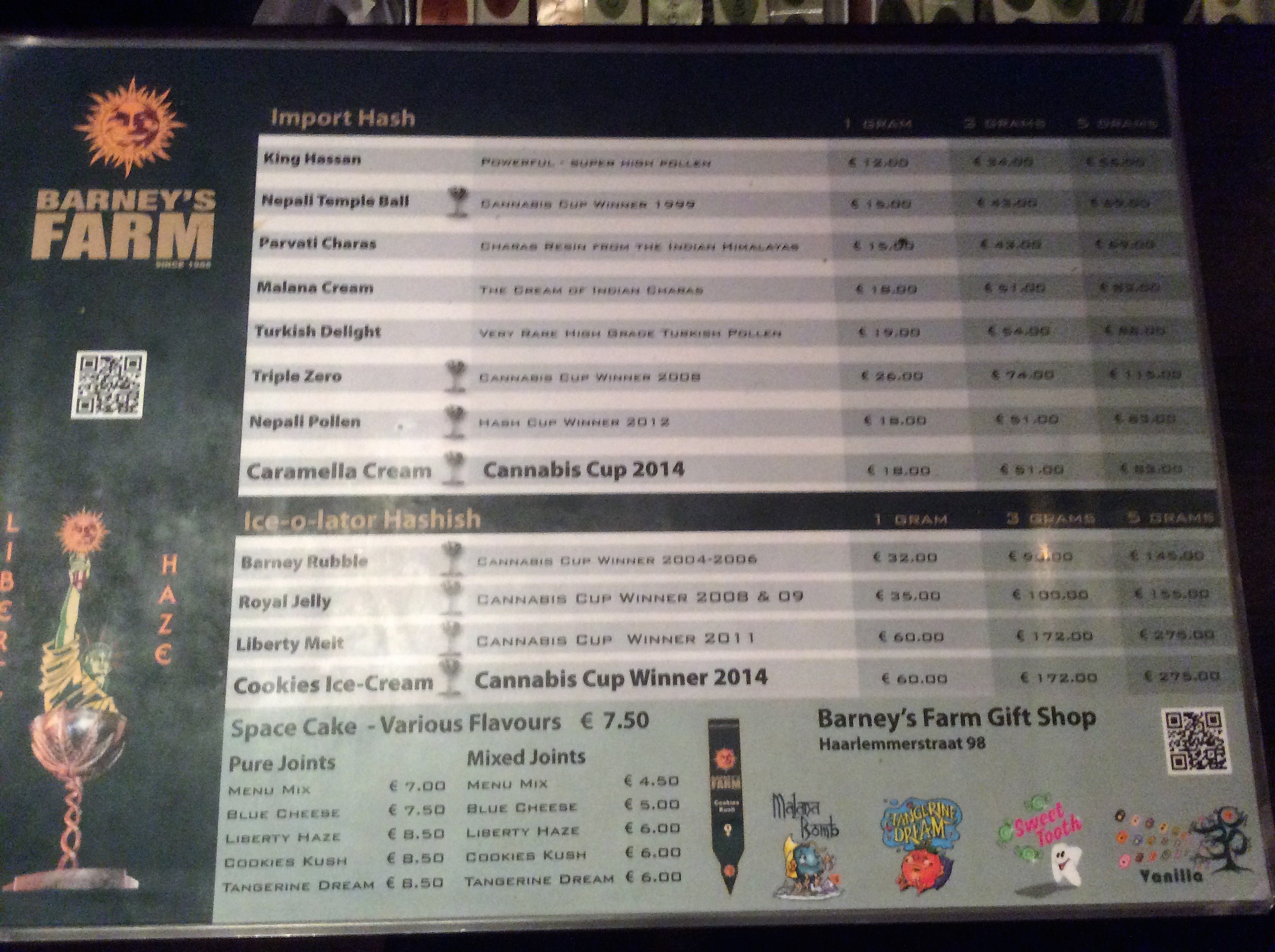 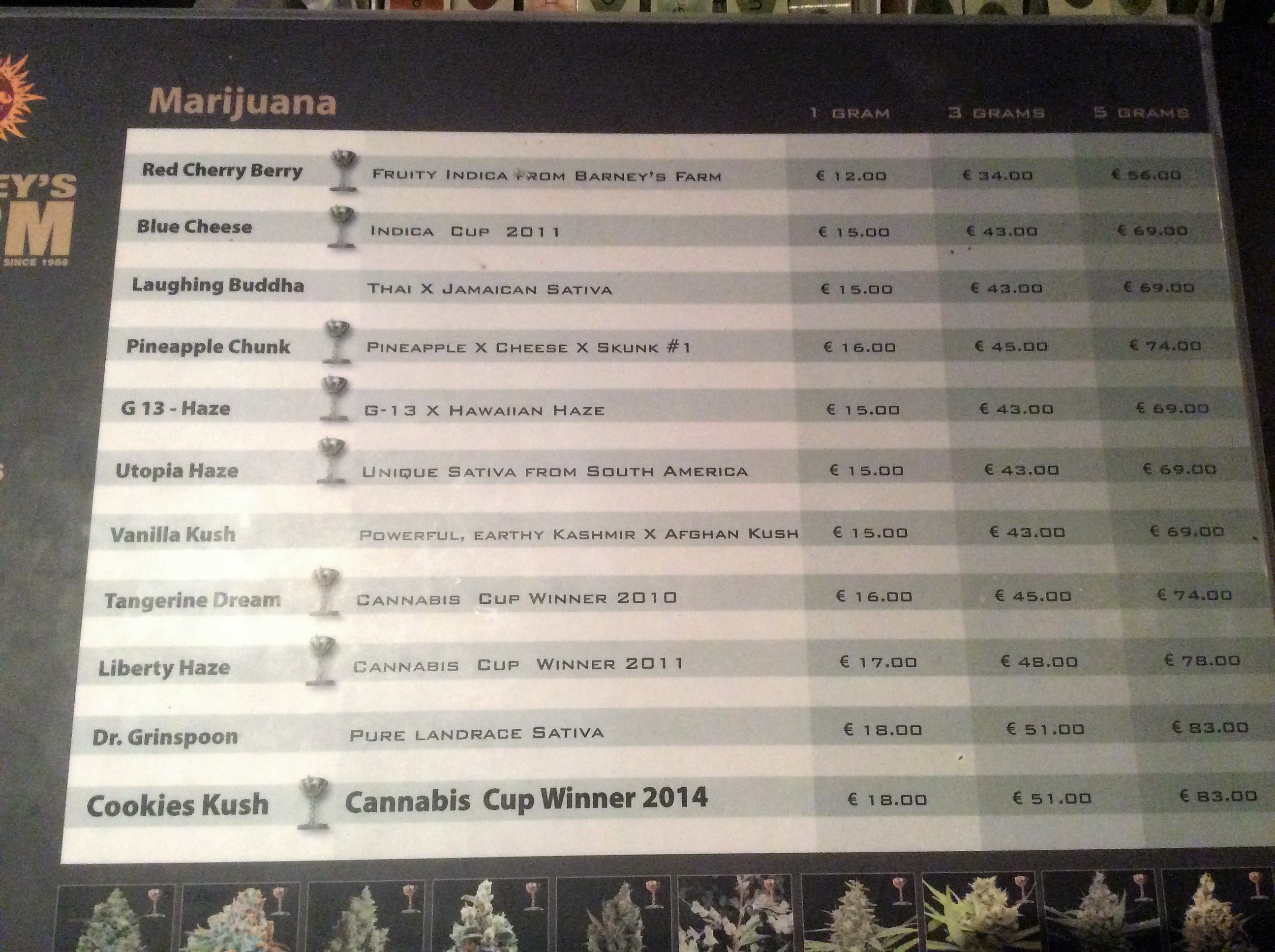 Is there something special about the gear at Barney's to warrant the higher prices?

Is it cured really well, or a super nice coffeeshop interior (only been once, ages ago - can't remember...), or is it just about the name and proximity to Centraal? (....Voyagers is closer to CS, good quality, not so pricey.....?...)
...as Sinatra once sang, Doobee doobee dooo....
Top

Largefella wrote: ↑Sun 10th Dec 2017 02:40 am Is there something special about the gear at Barney's to warrant the higher prices?

Is it cured really well, or a super nice coffeeshop interior (only been once, ages ago - can't remember...), or is it just about the name and proximity to Centraal? (....Voyagers is closer to CS, good quality, not so pricey.....?...)

Short answer = no.
Unless you want the strains they sell exclusively (which are largely hit and miss like just about everywhere else) you can shop elsewhere and receive the same quality for a lot less.
Try Het Ballonetje, voyagers, boereojongens chain.
Top

Big fan of Voyagers, for a while - been to Boereojongens, the one nearer center (newer one I think), but will soon visit the West location (sounds like the main deal?).

I'll have to seek out Het Ballonetje - not been yet - lacking....

Barney's for the convenience then.....
...as Sinatra once sang, Doobee doobee dooo....
Top

There are a few shops in the Boereo chain .... The one you mention out West, Bij - practically next door.
Supermarkt and Johnny I beleive are also affiliated, You'll find similar products in all of them with perhaps just enough menu variation to make it worth visiting all four.

Personally I'd choose Siberie or 137 over Barney's anyday, they're both less than 5 minutes walk from said location on Haarlemerstraat.
have a good one dude

Supermarkt is part of the Siberië chain, isn't it?

I've never seen the point of paying over the odds just to show you can. OHMF's recommendations for that area are good; there's Dampkring II as well, or Amsterdam Coffeeshop as it's now known.
Top

Appreciate the tips. I'll explore the West pretty soon - sounds like a good bit of new territory for me.

I'm a big fan of Siberie, (the missus is especially - the last two times we went, they had CBD, both weed and a CBD Red Leb Hash. Not so much my thing, but agreed - a lovely shop - great budtenders...)

But I digress on a Barney's thread - just wanted to say thanks!

(Now I've been thinking about it, I might have to go to Barney's now just for the experience of paying more Euros...dammit)
...as Sinatra once sang, Doobee doobee dooo....
Top

Products a bit prices ,but quality is pretty good not always

They do have good hash ,strongest hash in Dam Triple x,tastesed in Dam Turkist delite and Carremelo is worth a try a little more hit or miss ..
Under rated shop in my opinion

To be fair to them - I have enjoyed their products in the past that's for sure, and I often buy from Amnesia (NYCD and Acapulco Gold being my faves) so I shouldn't be so keen to dismiss them I guess.
And I do keep meaning to drop in and take a look at the menu for old times sake - and Green House too.
Top 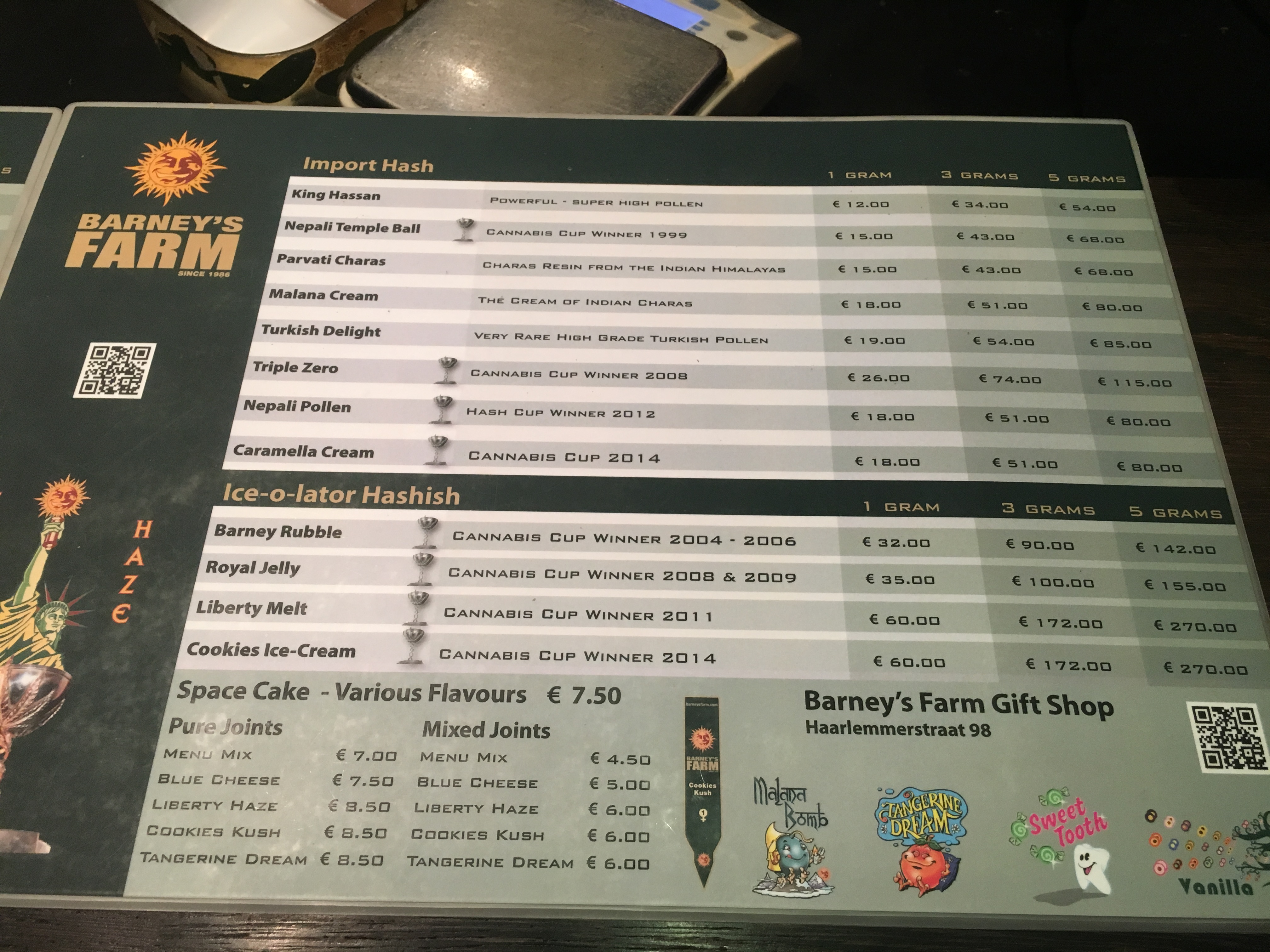 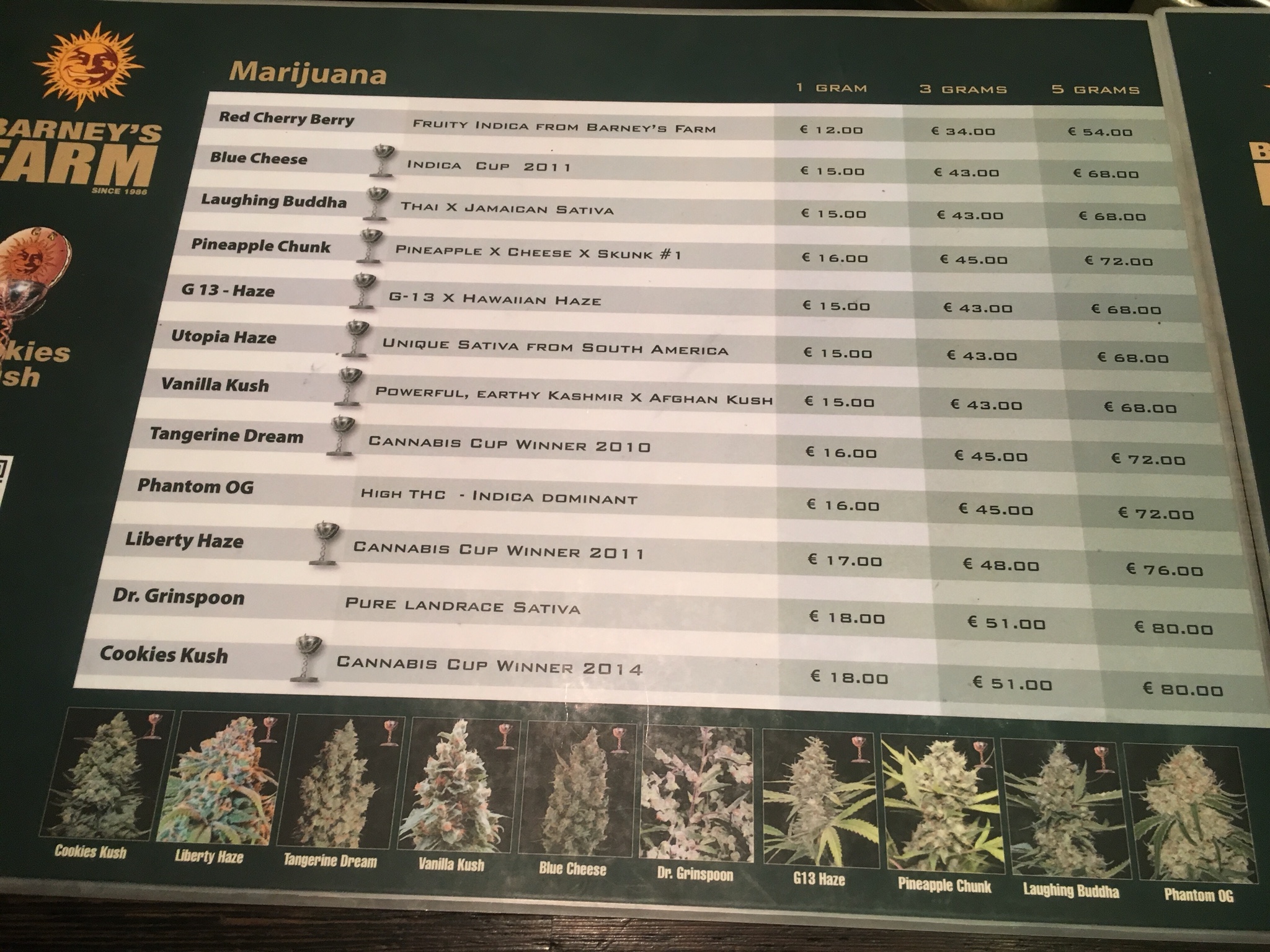